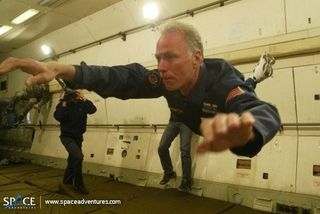 The third private citizen to fly in space, Americanmillionaire Gregory Olsen, says he?s excited about the future of space travel —especially if it means he might have another chance to fly.

Olsen visited the International Space Station in October2005 as a paying passenger aboard a Russian Soyuz spacecraft. His ticket, whichcost about $20 million at the time, was brokered with the Russian Federal SpaceAgency through the Virginia-based firm Space Adventures.

"I'd go in a heartbeat," Olsen said of a secondspace visit. Of particular interest would be an orbital trip around the moon ona Soyuz spacecraft. No space tourist has yet traveled beyond low-Earth orbit,but Space Adventures is working on offering such an excursion.

"I just have to sell another company" to affordthe trip, Olsen said. And private space travel to orbit may be getting moreexpensive.

With private seats for orbital trips to the space station inshort supply and increased production demands, the price for flights similar toOlsen's voyage are now going for a steeper price.

The seventh space tourist to fly, Cirque du Soleil founder GuyLaliberte, paid a reported $35 million for his 12-day trip to space inOctober 2009. "It looks like I got a bargain," Olsen told SPACE.com.

For now, orbital spaceflights have been the bulk of spacetourism offerings, though a number of private companies are hoping to offersuborbital joy rides in the next few years at a cost of up to $200,000 or so. [10 fantasyspaceships becoming real.]

If Olsen does manage to make it back to orbit, Olsen won'tbe the first repeat customer for Space Adventures. The fifth-ever spacetourist, American billionaire Charles Simonyi, revisited the space station on asecond mission in March 2009, two years after his first flight. Both trips werebooked through Space Adventures.

Olsen said he is eager to see how the future of U.S. humanspaceflight plays out.

President Barack Obama has proposed a new direction for NASAin which commercial companies take the lead in ferrying astronauts to low-Earthorbit, while the space agency focuses on going to an asteroid and to Mars.

He could easily envision a commercial taxi service going tothe International Space Station, and said he would like to see the industrytake things even further.

"I'm a moon fan," he said. "This mission thatSpace Adventures is planning ? that?s all possible. The moon could eventuallygo to the private sector too."

The spaceflyer said he reminisces about his space journeyalmost every day. "It'll be five years in October and not a day goes bywhen I don't think about it."

The experience was truly life-changing, he added.

"When you fly over the Earth, there's no sign oflife," Olsen said. "There's nothing to indicate that there's anythinggoing on there ? occasional jet trails, but other than that it just looksserene, perfect. When I was up there I just said, 'Wow, I'm the luckiest guy inthe world to be able to see this.'"