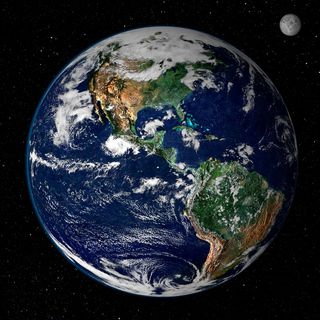 Earth's climate has enabled life to evolve on our planet. Life, in turn, has had effects on the climate.
(Image: © Reto Stöckli, Nazmi El Saleous, and Marit Jentoft-Nilsen, NASA GSFC)

Greenhouse gases have a bad reputation because of the rolethey're playing in global warming on Earth today.? However, scientists say wealso owe our lives to greenhouse gases because they might have allowed life totake hold in the first place.

A new study of how these and other climate conditions haveaffected the origin and evolutionof life on Earth could provide clues to understanding how climates on alienplanets might affect their potential life.

Greenhouse gases heat the planet by letting light in andthen trapping heat beneath, increasing the ambient temperature of the ground.

Scientists think the Sun used to shine less brightly whenthe Earth was young, so the early Earth should have been cooler than it istoday. But greenhousegases such as methane and carbon dioxide played an important role at thistime, warming the planet to a point where it was habitable for life.

"The problem was, the Sun was fainter and the energyinput to the atmosphere was reduced," said J. Lee Grenfell, an atmosphericchemist at the Technische Universit?t Berlin in Germany and lead author of thestudy featured in the journal Astrobiology. "We need to explainhow, despite a fainter Sun, the surface could be warm enough to host liquidwater."

Gaseous molecules like methane may have worked to heat theplanet, keeping the oceansfluid and not frozen. Since liquid water is a prerequisite for Earth'slife, the greenhouse gases may have therefore played an important role inmaking the planet habitable.

Grenfell uses knowledge about Earth's climate to buildatmospheric computer models and applies them to hypothetical extraterrestrialplanets. For example, he can adjust the type of parent star the planetorbits around, and the distance of the orbit, to monitor the affects thesevariations would have on climate.

"As our knowledge deepens in future, we will extend ourmodels to include, for example, interactions between the atmosphere and oceansand geological processes," Grenfell said.

While experts don't know for sure that alien life would needwater to survive, the presence of liquid water remains one of the mostpromising signs we can look for in the hunt for extraterrestrials.

"The biologists tell us that certainly life as we knowit on Earth needs liquid water to establish itself to thrive, to reproduce,"Grenfell said. "Liquid water requires certain climate conditions ? andhabitats for life on Earth occur over a large temperature range, approximatelybetween 0 degrees Celsius [32 degrees Fahrenheit] up to maybe 120 degreesCelsius [248 degrees Fahrenheit]. Different types of microorganisms adapt totheir particular niche temperature over this wide range. Complex life cansurvive and thrive from about 0 to 30 degrees Celsius."

The greenhouse effect is known to occur on other planets.For example, on Venus, wherethe atmosphere is composed primarily of carbon dioxide, the greenhouse effectis very efficient, pushing surface temperatures there above 860 degreesFahrenheit (480 degrees Celsius).? That's too hot for liquid water to exist,but Venus may have had oceans when it was younger. As the Sun and planet warmedover time, however, every drop of water in Venus's ocean would have boiledaway.

While greenhouse gases may have enabled life on Earth, lifealso interacts with greenhouse gases. Both the methane and carbon dioxide inour planet's atmosphere are today largely produced by living things. Frombacterial organisms to cows, life emits methane as a waste product. Carbondioxide is also created by life ? you exhale carbon dioxide with every breathyou take. Thus, the molecules in the atmosphere and the life on Earth affecteach other in a continuous feed-back cycle.? Life that evolved early in Earth'shistory began influencing these molecules, which then changed the climate evenmore to the point where new forms of life could evolve and affect the climate.

"The Earth is the only example we have where life haschanged the atmosphere of the planet," Grenfell said. "If the Earthhad evolved without life, or if life was switched off, the climate would bevery different."

Studying this relationship between climate and life on Earthcould point toward ways to search for life beyond Earth, he said. For example,on Earth, the simultaneous presence of methane and oxygen in large quantitiesserves as a bio-marker, or a sign that life is present. Oxygen is often abyproduct of life and therefore could be a tell-tale fingerprint of theexistence of life elsewhere.