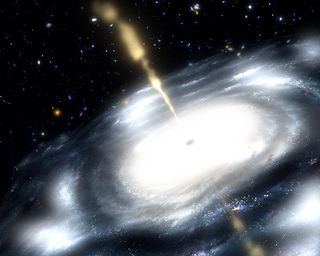 This artist's concept shows a galaxy with a supermassive black hole at its core. The black hole is shooting out jets of radio waves. New research led by theoretical astrophysicist David Garofalo of NASA's Jet Propulsion Laboratory in Pasadena, Calif., sug
(Image: © NASA/JPL-Caltech)

Oddball black holes that spin backward in theopposite direction of their surrounding debris discs appear to create morepowerful jets of radiation than their regular-spinning brethren, a new studyhas found.

The finding could change scientists?understand of how galaxies evolve since the development of stars depends on the radiationejected from the supermassiveblack holes anchoring their home galaxies.

A lot of what happens in an entire galaxydepends on what's going on in the miniscule central region where the black holelies," said the study's lead author David Garofalo, a theoreticalphysicist at NASA's Jet Propulsion Laboratory (JPL) in Pasadena, Calif., in astatement.

"Jets transport huge amounts of energyto the outskirts of galaxies, displace large volumes of the intergalactic gas,and act as feedback agents between the galaxy's very center and the large-scaleenvironment," said Rita Sambruna, a researcher at NASA Goddard SpaceFlight Center, and an author of the new paper. "Understanding their originis of paramount interest in modern astrophysics."

The scientists say that backward black holesshoot more powerfuljets because there's more space between the black hole and the inner edgeof its orbiting disk. This gap provides more room for the build-up of magneticfields, which fuel the jets, an idea known as the Reynold's conjecture afterthe theoretical astrophysicist Chris Reynolds of the University of Maryland,College Park.

The research is detailed in the May 27 issueof the Monthly Notices of the Royal Astronomical Society.

"This new model also solves a paradox inthe old spin paradigm," said theoretical astrophysicist David Meier, aresearcher at JPL who was not involved in the study. "Everything now fitsnicely into place."