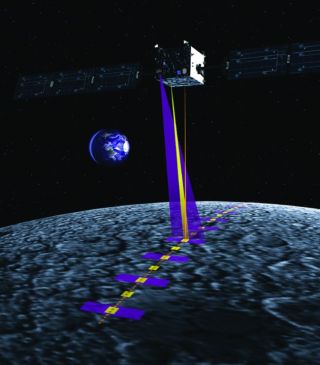 SMART-1 is studying the Moon in preparation for an international assault of landers and orbiters in future years. It is also looking at old U.S. Apollo landing sites, as well as touchdown spots of past Soviet robot probes.
(Image: © ESA/Medialab)

A European spacecraft now orbiting the Moon could turn out to be a time machine of sorts as it photographs old landing sites of Soviet robotic probes and the areas where American Apollo crews set down and explored.

New imagery of old Apollo touchdown spots, from the European Space Agency's (ESA) SMART-1 probe, might put to rest conspiratorial thoughts that U.S. astronauts didn't go the distance and scuff up the lunar landscape. NASA carried out six piloted landings on the Moon in the time period 1969 through 1972.

Fringe theorists have said images of the waving flag -- on a Moon with no atmosphere -- and other oddities show that NASA never really went to the Moon. No serious scientist or spaceflight historian doubts the success of the Apollo program, however.

"We are observing some of the landing sites for calibration and ground truth purposes," said Bernard Foing, Chief Scientist of the ESA Science Program.

Foing told SPACE.com that the SMART-1 orbiter circling the Moon has already covered the Apollo 11, 16, 17 landing sites, as well as spots where the former Soviet Union's Luna 16 and Luna 20 automated vehicles plopped down. The images have not yet been released.

Given SMART-1's initial high orbit, however, it may prove difficult to see artifacts, Foing explained. Using its ion engine, the probe has successfully spiraled down further to an altitude closer to the Moon.

Foing said that each Apollo site, where the engine blast of the two-person landing craft stirred up the landscape, could be worthwhile targets for SMART-1 imaging.

"We shall search for them, with measurements not only in black and white, but also in three colors giving some information about minerals, weathering or [rocket engine] plume disturbance," he said.

SMART-1 operators also plan sequences that keep the probe's camera specially trained on some landing sites as it sweeps overhead, Foing said. Along with these observations and others, the spacecraft will also be busy gleaning data in preparation for future international lunar exploration missions, he emphasized.

SMART-1 arrived in lunar orbit last November. Last month, ESA announced that the lunar mission would be extended by one year, pushing back the mission end date from August 2005 to August 2006.

The extension permits stereo measurements of select areas of interest. Doing so, topography maps of specific lunar real estate can be created. Mapping prospective landing sites for future robotic and human missions are possible too.

If SMART-1 can get an eyeful, why not use the Hubble space telescope to take photos of the Apollo landing sites? Hubble did photograph the Moon, in 1999.

"Anything left on the Moon cannot be resolved in any Hubble image," According to the Space Telescope Science Institute, which operates Hubble for NASA. "It would just appear as a dot."

Meanwhile, the trickiest task that the SMART-1 scientists have set themselves is to use a spacecraft spectrometer to look for the infrared signature of water ice, and perhaps frozen carbon dioxide and carbon monoxide too. Previous missions have provided evidence for water ice tucked away in permanently shadowed polar craters.

Any water on the lunar surface would be very helpful in the creation of permanent bases on the Moon, as outlined last year by President Bush. Other nations have Moon plans, too.

But to have survived, the water must be in the form of ice in places always hidden from the Sun. Such dark places exist, notably in the bottoms of small craters in the Moon's polar regions.