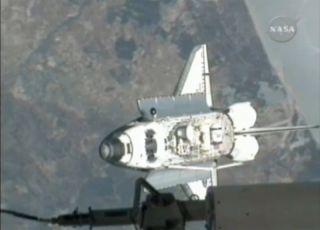 Space shuttle Atlantis performs an orbital back flip while flying underneath the International Space Station on May 16, 2010, in this view from a camera mounted on the exterior of the station. Atlantis is flying its 32nd and final flight on the mission, NASA's STS-132 trek to the station.
(Image: © NASA TV)

Skywatchers across the United States have a good chance fromnow until Sunday of spotting the space shuttle Atlantis and the InternationalSpace Station in the sky as they circle the Earth together.

Atlantisand the space station are currently flying together 220 miles (354 km)overhead, circling the globe once every 90 minutes.

Weather permitting, the space station shouldbe visible from various locations around the world just prior to sunriseand just after sunset. It will appear even brighter than usual in the morningand evening sky because of the attached shuttle, NASA officials said in askywatching alert.

The objects can appear as brightas Venus, depending on observing conditions, and move across the night skymuch like an airplane but without blinking.

NASA officials said that there will be good sightingopportunities on Tuesday for Alabama, Kentucky and Tennessee; on Wednesday forCalifornia and Texas; and on Thursday for Florida.

Information on when the spacecraft will be visible over yourcity is available on NASA's JohnsonSpace Center website.

You can also find detailed viewing opportunities bysearching the Internet for one of these four popular websites:

Each website will ask for yourzip code or city name and respond with a list of suggested spotting times.Predictions computed a few days ahead of time are usually accurate within a fewminutes. However, they can change due to the slow decay of the space station'sorbit and periodic reboosts to higher altitudes. It is a good idea to checkfrequently for updates.

Atlantis arrived at the space station Sunday after a two-dayorbital chase following its Fridaylaunch from Florida.

The shuttle delivered the Russian-built Mini ResearchModule-1 to the station, and the mission's three spacewalks are focused onstoring spare components outside the station, including a communicationsantenna, parts for the Canadian Dextre robotic arm and replacing six solararray batteries.

Atlantis' mission is slated to be its final plannedspaceflight after 32 missions since the orbiter entered service in 1985. Onlytwo more shuttle flights are scheduled (on Discovery and Endeavour,respectively) before NASA retires the orbiter fleet later this year.