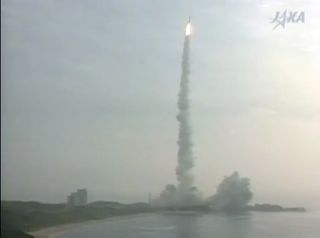 Japan's Venus Climate Orbiter Akatsuki and the Ikaros solar sail launch into space atop an unmanned H-2A rocket on May 20 (U.S. Eastern Time) from Tanegashima Space Center in Japan. It was early morning Friday, May 21 at the Japanese launch site.
(Image: © JAXA)

A powerful new Japanese spacecraft and experimental solarsail blasted off together on Thursday (Eastern Time) to start a six-month trekto explore Venus and cosmic parts beyond.

One mission is aimed at uncovering the secretsof Venus and its cloud-covered surface, while the other could become thefirst interplanetary solar sail to successfully fly in space. The JapanAerospace Exploration Agency (JAXA) is backing both spaceflights.

A Japanese H-2A rocket lifted off with the VenusClimate Orbiter, named Akatsuki, as its main payload at precisely 5:58:22p.m. EDT (2158:22 GMT). ?By coincidence, it was early Friday morning local Japantime at the Tanegashima Space Center at the time of launch.

The Akatsuki spacecraft's name means "Dawn inJapanese. If all goes well, it should arrive at Venusin December.

One of the main goals is to understand the "super-rotation"of the Venus atmosphere, where violent winds drive storms and clouds aroundthat planet at speeds of more than 220 mph (360 kph), some 60 times faster thanthe planet itself rotates.

"Akatsuki is the first 'meteorological satellite' of aplanet other than the Earth," said Seiichi Sakamoto, director for spacescience outreach at JAXA's Institute of Space and Astronautical Science. "Detailedstudy of Earth's sister planet will provide us with breakthroughs in the fieldof atmospheric science."

The solar sail craft will take the same starting trajectoryas Akatsuki, but is only scheduled to pass the orbit of Venus during its ambitiousthree-year journey to the other side of the sun.

Ikaros is designed to rely only upon the pressure ofsunlight to push it along, but it also carries thin film solar cells embeddedwithin its kite-like frame that can generate electricity. Such a design mightallow future spacecraft to draw electricity for ion-propulsion engines, even asthey also use the solar sail for backup — not unlike a sailing boat that alsouses a solar-powered engine.

The mission launch involved an unusual maneuver for the H-2Arocket, which typically separates its main payload before the smaller payloads.

"This time we separated three piggyback satellitesbefore Akatsuki," Sakamoto told SPACE.com. "This is new to H-2A."

A JAXA publicity campaign to send names and messages toVenus has received more than 260,000 names and messages from around the world, accordingto Sakamoto. Akatsuki's study of Venus is planned to last at least two yearsafter it enters the planet's orbit.

The Japanese space agency also launched a new spacefreighter late last year aboard an H-2B rocket, which represents the newer andbigger descendant of the H-2A rocket that kicked off the Venus mission.