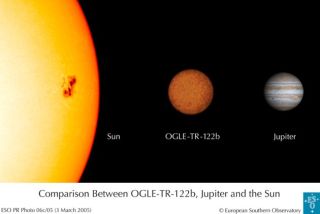 A size comparison of the Sun, the newfound small star, and Jupiter.

Astronomers have found the tiniest full-fledged star known, an object just 16 percent bigger than Jupiter. It is smaller than some known planets that orbit other stars.

The star is a companion to a Sun-like star toward the center of our Milky Way Galaxy. It was found and measured by observing changes in the light output of the system when the smaller star passes in front of the larger star from our vantagepoint.

Between planets and stars, there exist odd objects called brown dwarfs. They're often referred to as failed stars, because they don't have enough mass to trigger the thermonuclear fusion that powers real stars, like the Sun. A brown dwarf is typically several times the mass of Jupiter, but astronomers haven't determined the exact size or mass cutoffs on either end.

The new discovery, announced Thursday, puts a firm diameter measurement on the smallest star that does in fact shine normally.

The result shows stars less than one-tenth the mass of the Sun can generate thermonuclear fusion while being barely bigger than Jupiter.

"Imagine that you add 95 times its own mass to Jupiter and nevertheless end up with a star that is only slightly larger," suggests Claudio Melo European Southern Observatory (ESO). "The object just shrinks to make room for the additional matter, becoming more and more dense."

The star is more than 50 times as dense as the Sun. It is smaller than some extrasolar planets, including one world that is 30 percent larger than Jupiter.

"This result shows the existence of stars that look strikingly like planets," said Frederic Pont of the Geneva Observatory in Switzerland, another member of the study team.

The diminutive star was initially discovered as part of the Optical Gravitational Lensing Experiment (OGLE) survey, which identified several dozen stars toward the center of our galaxy that appeared to have something moving in front of them. The diameter measurements were done from the ESO's Paranal Observatory in Chile.

The star is named OGLE-TR-122b. It orbits the larger star once every 7.3 days. Because of its relatively low mass, the smaller star's nuclear energy production is low compared to a Sun-like star, the astronomers said.