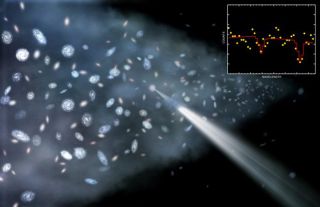 Scientists have used NASA's Chandra X-ray Observatory and ESA's XMM- Newton to detect a vast reservoir of gas lying along a wall-shaped structure of galaxies about 400 million light years from Earth. In this artist's impression, a close-up view of the so-called Sculptor Wall is depicted. This discovery is the strongest evidence yet that the "missing matter" in the nearby Universe is located in an enormous web of hot, diffuse gas.
(Image: © Spectrum: NASA/CXC/Univ. of California Irvine/T. Fang Illustration: CXC/M. Weiss)

A giant reservoir of intergalactic gas was detected lyingalong a wall-shaped structure of galaxies about 400 million light-years away fromEarth, providing the strongest evidence yet that the "missing matter"in the nearby universe is located in an enormous web of hot, diffuse gas.

Observations from NASA's ChandraX-ray Observatory and ESA's XMM-Newton observatory have allowed astronomersto examine the missing matter, which is not the same as dark matter. The missingmatter is composed of baryons, which are particles such as protons andelectrons that make up most of the mass of the visible matter in the universe.

A variety of measurements of distant gas clouds and galaxieshave provided a good estimate of the amount of "normal matter" thatwas present when the universe was only a few billion years old. But, aninventory of the much older, nearby universe discovered only about half as muchnormal matter ? a surprising deficit.

So, where does this missing matter reside in the nearbyuniverse? A recent study predicts that the missing matter is mostly found in aweb of hot, diffuse gas, known as the Warm-Hot Intergalactic Medium (WHIM). Scientistsbelieve that the WHIM is composed of material left over following the formationof galaxies, enriched by elements that were blown out of the galaxies. ??

"Evidence for the WHIMis really difficult to find because this stuff is so diffuse and easy to seeright through," said lead author Taotao Fang of the University ofCalifornia at Irvine. "This differs from many areas of astronomy where westruggle to see through obscuring material."

To locate the WHIM, researchers examined X-ray observationsof a rapidly growing supermassiveblack hole known as an active galactic nucleus, or AGN. The AGN is locatedabout two billion light-years away, and generates immense amounts of X-raylight as it sucks matter inwards.

Along the line of sight to this AGN, at a distance ofapproximately 400 light-years away, is the so-called Sculptor Wall. The"wall" is a large diffuse structure that stretches across tens ofmillions of light-years and contains thousands of galaxies.

If the scientists' theoretical simulations are correct, theSculptor Wall could potentially contain a significant reservoir of the WHIM aswell. The WHIM in the wall should absorb some of the X-rays from the AGN asthey make their journey across intergalactic space to Earth.

Absorption of X-rays by oxygen atoms in the WHIM was clearlydetected by Fang and his colleagues. The characteristics of the absorption areconsistent with the distance of the Sculptor Wall, as well as the predictedtemperature and density of the WHIM.

The results of this study give scientists confidence thatthe WHIM can also be located in other large-scale structures.

Previous claimed detections of the hot component of the WHIMhave been controversial because they were made using only one X-raytelescope, so the statistical significance of majority of the results havebeen questioned.

"Having good detections of the WHIM with two differenttelescopes is really a big deal," said co-author David Buote, also fromthe University of California at Irvine. "This gives us a lot of confidencethat we have truly found this missing matter."

The new study also removes another uncertainty from previousclaims: since the distance of the Sculptor Wall is already known, thestatistical significance of the absorption detection is greatly enhanced overprevious "blind" searches.

These previous searches attempted to find the WHIM byobserving bright AGN at random directions on the sky, in the hope that theirline of sight would intersect a previously undiscovered large-scale structure.

In the past, confirmed detections of the WHIM were difficultbecause of the structure's extremely low density. Using observations andsimulations, scientists calculated that the WHIM has a density that isequivalent to only 6 protons per cubic meter. As a comparison, the interstellarmedium, which is the diffuse gas that is in between stars in our owngalaxy, typically has about a million hydrogen atoms per cubic meter.

"Evidence for the WHIM has even been much harder tofind than evidence for dark matter, which is invisible but can be detectedbecause of its gravitational effects on stars and galaxies," Fang said.

The results of the study were published in the May 10th issueof The Astrophysical Journal.