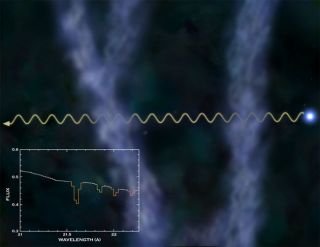 This illustration shows the absorption of X-rays from the quasar Mkn 421 by two intergalactic clouds of diffuse hot gas, and a portion of the Chandra X-ray spectrum of the quasar. The spectrum provides evidence that three separate clouds of hot gas are filtering out, or absorbing X-rays from Mkn 421. Image
(Image: © Spectrum: NASA/SAO/CXC/F.Nicastro et al.; Illustration: CXC/M.Weiss)

Only about 5 percent of the mass and energy in the universe is normal matter, the subatomic particles that make up all things visible. Scientists have no clue what the other 95 percent is, so they've dubbed part of it dark matter and the rest dark energy.

Even a good portion of the normal matter, the 5 percent slice of the overall pie, has proved elusive to spot. New observations have found some of it.

The total mass of the universe, visible and hidden stuff, is calculated based on how stars huddle in galaxies and the fact that clusters of galaxies are gravitationally glued together. Normal matter alone can't explain the full gravity of this universal situation.

Dark energy is presumed to exist because the universe is expanding at an ever-increasing pace, and something must be driving that acceleration.

The 5 percent of normal matter includes stars, planets, their satellites, plus interstellar and intergalactic gas.

Normal matter is referred to as baryons.

"An inventory of all the baryons in stars and gas inside and outside of galaxies accounts for just over half the baryons that existed shortly after the Big Bang," explained Fabrizio Nicastro of the Harvard-Smithsonian Center for Astrophysics. "Now we have found the likely hiding place of the missing baryons."

The results are detailed in the Feb. 3 issue of the journal Nature.

Computer simulations of the formation of galaxies and galaxy clusters indicated that the missing baryons might be contained in an extremely diffuse web-like system of gas clouds from which galaxies and clusters of galaxies formed.

These clouds have defied detection because of their predicted temperature range of a few hundred thousand to a million degrees Celsius, and their extremely low density. Evidence for this warm-hot intergalactic matter (WHIM) had been detected around our Galaxy, or in the Local Group of galaxies, but the lack of definitive evidence for WHIM outside our immediate cosmic neighborhood made any estimates of the universal mass-density of baryons unreliable.

Nicastro and colleagues looked at X-rays coming from a distant bright galaxy called Markarian 421 as they passed through a region of warm gas. The X-rays were absorbed by ionized oxygen and nitrogen atoms there that are normally 'invisible,' and the scientists say that there is enough matter in the gas to account for the missing mass.

But these are just two gas clouds, so more observations are needed.

"It is difficult to know whether this region is typical of the entire universe," writes J. Michael Shull in a related commentary in the journal.