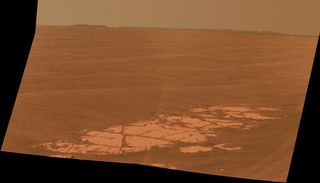 NASA's Mars Exploration Rover Opportunity used its panoramic camera (Pancam) to capture this view of the rim of Endeavour crater, the rover's destination in a multi-year traverse along the sandy Martian landscape. The image was taken during the 2,226 Mart
(Image: © NASA/JPL-Caltech/Cornell University)

NASA'sOpportunity Mars rover has snapped a new picture of its next destination, thedistant Endeavour crater.

Opportunity,which began its seventh year on Mars along with its sisterrover Spirit in January, has been making a marathon drive toward the giantcrater Endeavour since September 2008 after spending two years exploring thesomewhat smaller Victoria crater.

Thenew Marsphoto shows an outcrop of rocks at the foot of the rover and beyondthese rocks rippled dunes, which are about 8 inches (20 cm) tall. A portion ofthe rim about 8 miles (13 km) away appears on the horizon at the left edge ofthe image, along with the rim of an even more distant crater, Iazu, on theright.

Endeavouris Opportunity's biggest crater target yet. It is 13 miles (21 km) in diameter,about 25 times wider than Victoria.

Opportunity?sintended route, about 12 miles (19 km) long, has the rover headed south beforeturning east in order to bypass potentially hazardous sand ripples to the east,larger than the ripples in the image.

Ifall goes well, Opportunity is set to match the Viking 1 lander?s record forlongest-running mission on Mars of six years and 116 days. Spirit already brokethe Martian record on April 30, assuming it wakes up from its winterhibernation.