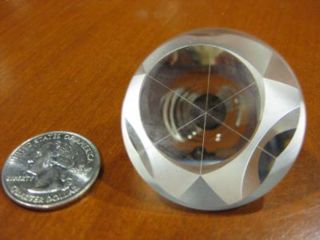 Apollo astronauts left arrays of corner-cube prisms, like the one shown here, on the moon 40 years ago. Now light bouncing back from these reflectors appears to have dimmed. Scientist think dust is to blame.
(Image: © UC San Diego)

Astronomers have long known that light bouncing off man-madereflectors on the lunar surface is fainter than expected, and mysteriously dimseven more whenever the moon is full. Now they think moon dust and solar heatingmay be the dirty culprit, according to a new report.

The evidence is right here on Earth, researchers said. Onlya fraction of the light a team beamed at the moon from a telescope in NewMexico bounces off of old reflectors on the lunar surface and returns to theobservatory.

"Near full moon, the strength of the returning lightdecreases by a factor of ten," said Tom Murphy, an associate professor ofphysics at the University of California, San Diego, and the study's leadauthor. "Something happens on the surface of the moon to destroy theperformance of the reflectors at fullmoon."

Murphy leads an effort to precisely measure the distancefrom Earth to the moon by timing the pulses of laser light that reflect off targetsleft on the lunar surface 40 years ago by Apolloastronauts.

Earth's atmosphere scatters the outgoing beam, spreading itover a distance of approximately 1.24 miles (2 km) on the surface of the moon.

The scientists aim the light at polished blocks of glasscalled comer cube prisms, each of which is about 1 1/2 inches (3.8 cm) indiameter.

Most of the laser light misses its target, which is roughlyequivalent to the size of a suitcase. Furthermore, the reflectors also diffractreturning light so that it spreads over 9.3 miles (15 km) when it reaches Earthagain.

So the researchers have always expected to recapture only asmall portion of the reflected photons, or particles of light, that actuallybounce back. On average, their instruments detect just one-tenth of thereturning light, and when the moon is full, ?the results are oddly ten timesworse.

Murphy believes that the cubes are heating unevenly at fullmoon, and that the cause of this discrepancy is likely caused by dust.

"Dust is dark," Murphy said. "It absorbssolar light and would warm the cube prism on the front face."

NASA engineers went to great lengths to minimize temperaturedifferences across the prisms, which rest in arrays tilted toward Earth.Individual prisms sit in recessed pockets so that they are shielded from directlight when the sun is low on the moon's horizon.

But, when the full face of the moon appears illuminated fromEarth, the sun is directly above the arrays.

"At full moon, the sun is coming straight down the pipeinto these recessed pockets," Murphy explained.

The reflective properties of the prisms, which are clearglass, derive from the shape of their polished facets. Uneven heating of theprisms, which could occur with absorption by a dust coating, would bend theshape of the light pulses they reflect, interfering with the accuracy ofmeasurements.

Light travels faster through warmer glass, and although allpaths through the cube prisms are the same length, photons that strike the edgeof the reflector will stay near the surface. Meanwhile, those that strike thecenter will pass deeper into the cube before hitting a reflective surface.

If the surface of the prism is warmer than the deeper parts,light that strikes the edges of the prism will re-emerge sooner than light thatstrikes the center, distorting the shape of the reflected laser pulses.

But finding the source of the problematicdust could be more difficult, Murphy said.

The moon has no atmosphere and no wind, but electrostaticforces can move dust around. A constant rain of micrometeorites might also puffdust onto the moon'ssurface. Larger impacts that eject material from the surface across agreater distance could also contribute to the buildup.

Murphy recently returned from a trip to Italy, where achamber built to simulate lunar conditions may help sort through the possibleexplanations.

"We think we have a thermal problem at full moon, plusoptical loss at all phases of the moon," Murphy said. Accumulated dust onthe front surface of the reflectors could account for both observations.

If sunlight-heated dust is really to blame, the researchersshould notice the effect vanish during a lunareclipse. In other words, light should bounce back while the moon passesthrough Earth's shadow, then dim again as sunlight hits the arrays once more.

"Measurements during an eclipse ? there are just a few? look fine," Murphy said. "When you remove the solar flux, thereflectors recover quickly, on a time scale of about half an hour."

The researchers' findings will be published in an upcomingissue of the journal Icarus.

Previously, the McDonald Observatory, a research unit of TheUniversity of Texas at Austin, located in the Davis Mountains of West Texas,ran similar experiments at full moon between 1973 and 1976. But, between 1979and 1984, they had "a bite taken out of their data," during fullmoons, Murphy said. "Ours is deeper." This could signify that theproblem may be getting worse.

So far, bad weather has prevented the project from operatingduring a lunar eclipse. The next opportunity for the researchers will be on thenight of Dec. 21, 2010.