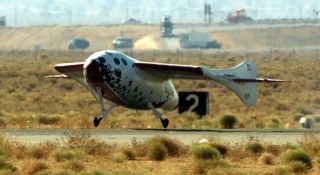 Therecord-setting, privately-built suborbital rocket plane -- SpaceShipOne-- is headed for a landing at the Smithsonian's National Air and Space Museum(NASM) in Washington, D.C.

SpaceShipOne is to bedisplayed in the museum's Milestones of Flight Gallery, said Peter Golkin, a NASM spokesman. That gallery exhibits some of themajor firsts in aviation and space history.

Rutan has advisedSPACE.com that the scheduled handover to NASM of SpaceShipOnewill first see the craft on public display at the Experimental AircraftAssociation's (EAA) AirVenture 2005, held July 25-31at Wittman Regional Airportin Oshkosh, Wisconsin.

Accordingto the EAA, preliminary plans call for the White Knight carrier craft and SpaceShipOne to be at the EAA event for the entireseven-day run.

FromOshkosh, Rutan added,the White Knight/SpaceShipOne duo will then fly to Washington, D.C.,with the rocket plane to be presented to NASM the first week of August.

Therocket plane will be in good company. It joins the Wright Brother's Wright 1903Flyer, the Spirit of St. Louis, as well as the Apollo 11 Command Module "Columbia" that carriedthe first men to walk on the Moon.

"Bywinning the X Prize it clearly represents a next generation of space travel,possibly one that opens the doors to your average person making it into space,as opposed to trained astronauts and cosmonauts," NASM'sGolkin told SPACE.com.

Nospecific date has been set for the craft to go on public display at the museum,but it will be this year, Golkin said.

AnotherRutan design, the Voyager airplane, hangs in thesouth lobby of the National Air and Space Museum. That aircraftsuccessfully completed in December 1986 the first nonstop, non-refueled flightaround the world, co-piloted by Rutan's brother, DickRutan and Jeana Yeager.

OnOctober 4, 2004, SpaceShipOne rocketed into history,becoming the first private spacecraft to exceed an altitude of 328,000 feettwice within the span of a 14 day period, thus claiming the $10 million Ansari X Prize.

Inaddition to meeting the altitude requirement to win the AnsariX Prize, pilot Brian Binnie also broke the August 22,1963 record by Joseph A. Walker, who flew the X-15 to an unofficial worldaltitude record of 354,200 feet.

Theprevious week, SpaceShipOne -- under the control ofpilot Mike Melvill -- coasted above the 62-mile(100-kilometer) altitude point and successfully completed the first of the twoprize-winning flights.

TheAnsari X Prize purse was established to stimulatespace tourism. Prize money was offered for the first privately built vehiclethat could safely carry a pilot and the equivalent weight of two passengers tothe edge of space, and then repeat that feat within two weeks.

Acash award for the achievement was modeled after the OrteigPrize that Charles Lindbergh won in 1927 by flying solo across the Atlantic Ocean.