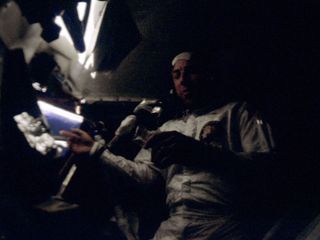 Tuesday marks the 40thanniversary of the in-flight emergency onboard Apollo 13. With the call toMission Control, "Houston, we've had a problem," the goalfor the astronauts and flight controllers went from landing men on theMoon to bringing them safely back to Earth.

I spent eight years interviewing 23 of the 24 Apollo lunar astronauts formy 1994 book "A Man on the Moon" (Apollo 13's Jack Swigert had dieda  few years before I began my research.) When I revisited thoseamazing conversations for my book with Victoria Kohl, "Voices fromthe Moon," I was struck by how many surprises came through inthe astronauts' words. And none were more memorable than the comments ofApollo 13 commander Jim Lovell and his lunar module pilot, FredHaise.

For starters, Jim Lovell told me that he did not regret theway Apollo 13 turned out -- despite the fact that theexplosion of an oxygen tank 200,000 miles from home cost him hischance to land on the moon, and almost cost him his life.

"We were given the situation," Lovell explained, "to reallyexercise our skills, and our talents to take a situation which was almostcertainly catastrophic, and come home safely. That's why I thought that 13,of all the flights -- including [Apollo]11 -- that 13 exemplified a real test pilot's flight."

But Fred Haise revealed different feelings. "Our mission was afailure," he said. "I mean, there was no way around it. There'sno question it was a remarkable recovery from a bad situation. But atthe same time, relative to the mission intended, it was a failure."

"Biggest disappointment of my life."

Actually, Haise said, the trauma of Apollo 13 began even beforeliftoff, when crewmate Ken Mattingly was bumped from the flight because ofa suspected case of German Measles and replaced with backup JackSwigert. "The crew change-out was in itself emotional," saidHaise. "You had a team, you had worked together for a longperiod, and now at the last minute you're going to partially take the teamapart."

What the astronauts could not have known, of course, was that far greaterstresses awaited them in space. But as Haise recalled,the accident aboard Apollo 13 had a different feeling from anyemergency he'd experienced flying high-performance jets.

"Most of the serious things I've had [in airplanes] were so quickthat it was, frankly, only after the fact that, you've done whateveryou've done, now you have time to even recollect and think about howbad it was. This, in comparison, was a slower moving drama than anyclose midairs or several crashes I've had in airplanes. Nothing likethat at all."

Indeed, after the explosion, the astronauts had to endure afour-day ordeal as they struggledto reach Earth -- with the help of literallythousands of flight controllers, engineers, and NASA managers acrossthe country, who worked around the clock to devise thenecessary procedures for the astronauts' safe return. Still, Lovellsaid, he and his crew had plenty of problems no one on Earth could helpthem solve -- especially learning to fly the spacecraft in a waythey had never trained for.

"You flew by the seat of your pants," Lovell recalled. "I mean,there was a case where you had to do your burns manually. You had to learnto fly the vehicle over again."

And then there were untried procedures.

"A lot of the instructions on what to do came from theground, obviously. Because they had all thepeople -- the contractor people, the government people, thesimulators -- to check out those things. But to executethem -- it's one thing to set up procedures and do it, butto execute them when you know that your ass is on the line is alittle bit different. And that is essentially what was happening on Apollo13."

Surprisingly, Lovell never felt as if he were staring death in the face.

"I think that as long as we had an option, it never really cameup," Lovell explained. "If there was a chance to get home, youwork on the plus side; you don't work on the minus side."

"I never felt we were in a hopeless [situation]," Haise agreed."No, we never had that emotion at all. We never were with our backsto the wall, where there was no more ideas, or nothing else to try, or nopossible solution. That never came."

Haise elaborated, "If we had tried to activate the LM [lunarmodule], and it would not have activated, then we'd have been [out ofluck]. Or I'd turned on the LM and there would have been nothin', no[cooling] water [for the electronics], all the water tanks had burst,right then I'd have known, 'We ain't gonna make it.' But we hadnothing like that ever occur."

"You understand what I'm saying?" Haise clarified. "There wasnothing there that said irrefutably we don't have a chance."

But what if things had gone differently? How would the astronautshave faced the certainty of becoming the first humans to die inspace?

"We never would've thought about it until all hope was lost,"Lovell told me. "And then our idea was, if all hope was lost, if wewent by the Earth -- saywe missed the Earth. And we were on an orbit about the sun, if we hadexceeded the escape velocity.... My idea was to hold off, youknow, as long as we had options, as long as we could stand it,send back data.... We probably would have been farther out than anybody.And then, you know, then we would decide, you know, what to do.

"People often say, 'Did you [carry] a suicide pill?' or somethinglike that," said Lovell. "You didn't [need] those. All you hadto do was crank open the little valve to the hatch, there...

"Maybe we would have all committed suicide by opening up thevent valve," said Lovell. "And that would have been the end ofthe deal."

Clickthrough to collectSPACE.com to read how events on theInternational Space Station recalled Apollo 13.