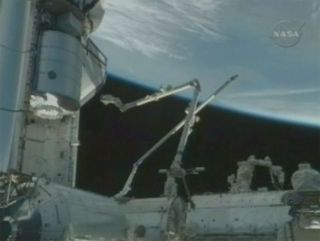 This view from a camera on the hull of the International Space Station shows the shuttle Discovery and its Leonardo cargo pod during transfer work on April 7, 2010 on NASA's STS-131 mission.
(Image: © NASA TV)

It?s moving day at the International Space Station, whereshuttle astronauts are delivering a cargo module the size of a small bus packedwith tons of fresh supplies and equipment.

Together, all 13 astronauts on the linked shuttleand space station will use the orbiting laboratory?s Canadian-built roboticarm to pluck the cargo pod ? called Leonardo ? out of Discovery?s payload bayand attach it to the station.

?It is a challenging part. It?s like moving into a newhouse,? said Discovery astronaut Naoko Yamazaki, Japan?s second femaleastronaut and the loadmaster ? or cargo chief ? of the shuttle flight, in aNASA interview. ?

The Leonardo module is about 21 feet long and 15 feet wide, and weighed about 27,274 pounds when it was packed for Discovery's 13-day mission.

Yamazaki will help move the Leonardo module and overseethe nearly 120 hours of transfer work over nine days to move new scienceequipment, fresh supplies and spare parts from the cargo pod to thespace station. Once the pod is empty, the astronauts will fill it withbroken equipment, trash and other gear slated to return to Earth.

?Some items needs to be treated very carefully and someitems need to be transferred in a certain order,? Yamazaki said. ?I believe itwill go well with all my great crew members? help.?

Some of the big ticket items for the station inside thecargo pod are several racks of new science experiments, each of them the sizeof a double-wide refrigerator. The module also contains a new astronaut bedroomfor the station, which will eventually be converted into the equivalent ofspace bathing room for washing up.

The astronauts are also delivering a novel devicedesigned to create waterfor the station?s crew using waste hydrogen and carbon dioxide gases. The processcreates methane as well, which will be vented overboard, NASA engineers havesaid.

This is NASA?s last flight of a cargo pod like Leonardo (severalwere built). It is also the Leonardo module?s last round trip to space. Whennext flies to the space station later this year, it will be left attachedpermanently to serve as a walk in closet.

Discovery is also hauling huge spare ammonia coolant tankto be installed on the station?s exterior during the mission?s three plannedspacewalks. The first spacewalk is slated to begin on Friday.

While astronauts work in space, engineers on Earth arebusy analyzing data and images of their Tuesday inspection of Discovery?s heatshield. A mainantenna failure on Discovery forced the shuttle crew to wait until arrivingat the station to beam the data to Earth.

Mission managers will sift through the data to determineof Discovery?s heat shield has suffered any damage severe enough to warrantextra inspections or repairs. So far, NASA has found no cause for concern withthe shuttle?s heat shield.

The inspections are a standard part of every NASA shuttlemission since the tragic loss of shuttle Columbia and seven astronauts in 2003.Heat shield damage caused by debris during liftoff caused the disaster, so NASAhas developed inspection and repair techniques to keep close watch on shuttlehealth.

?As we?re all used to at home, sometimes some networksare slower than others,? Van Cise said.