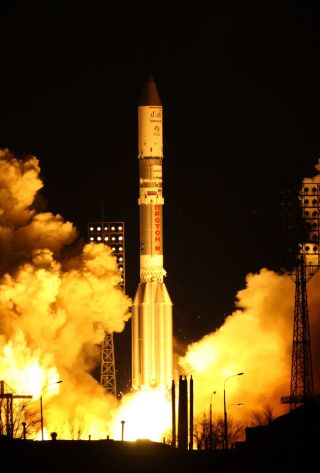 A new direct broadcasting satellite for DISH Network waslaunched into orbit Saturday by a Proton rocket, beginning a 15-year mission toexpand the service's high definition programming across the United States.

Once operational, EchoStar 14 will reachmore than 14 million DISH Network subscribers across the United States,including Alaska, Hawaii and Puerto Rico. The spacecraft weighed 14,074 poundsat launch, near the peak capacity of the heavy-lift Protonrocket and the Breeze M upper stage.

ILS is the U.S.-based firm responsible for selling Protonlaunches on the commercial marketplace.

"We want the satellite to be designed to last at least15 years," said Dean Olmstead, president of EchoStar Satellite Services ofEnglewood, Colo. "They have a launch vehicle that can launch a payloadcontaining a greater fuel load that ensures that 15-year life span."

The Proton rocket and EchoStar 14 blastedoff from the Baikonur Cosmodrome in Kazakhstan at 1826:57 GMT (2:26:57 p.m.EDT). It was just after midnight at the launch site in Central Asia.

The shining silver booster rocketed into clear skies,accelerating past the speed of sound about a minute after liftoff. Two minutesinto the flight, the 191-foot-tall rocket shed its six-engine first stage asthe Proton's second stage engines took over.

The Breeze M ignited its main engine for nearlyfour-and-a-half minutes to deliver EchoStar 14 into a low-altitude parkingorbit about 16 minutes after liftoff, according to ILS.

The Breeze M fired four more times to gradually pushEchoStar 14 to higher altitudes. The rocket was targeting a geosynchronoustransfer orbit with a high point of 22,236 miles, a low point of 1,939 milesand an inclination of 26.7 degrees.

The upper stage deployed EchoStar 14 on time at about 0337GMT Sunday (11:37 p.m. EDT Saturday) to complete the launch, according tostatements by Khrunichev and ILS.

"Everything occurred as planned with ignition, shutdownand separation of the Proton's first three stages," said an update on theILS Web site. "Then the Breeze M upper stage with the satellite continuedthe mission, igniting five times, and then releasing the satellite into [the]transfer orbit."

EchoStar 14's own propulsion system will nudge thespacecraft higher in the coming weeks, eventually reaching a circular orbitabout 22,300 miles high over the equator.

"On behalf of our customer, DISH Network, we arepleased with the performance of the launch vehicle and look forward to testingof the satellite," said Rohan Zaveri, vice president of space programs forEchoStar.

After checks to verify the satellite is functioningproperly, EchoStar 14 will enter service parked at 119 degrees west longitude.It will replace the EchoStar 7 satellite launched on an Atlas rocket inFebruary 2002.

Designed to last up to 15 years, EchoStar 14 carries 103Ku-band transponders that will reach customers across North America.

The satellite's manufacturer is Space Systems/Loralheadquartered in Palo Alto, Calif. EchoStar 14 is based on the company'sLS-1300 platform.

Another commercial Proton launch is scheduled for April 24with the SES 1 communications satellite.