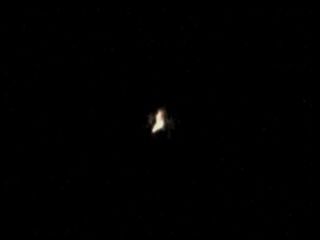 The heavens above has been a busy place of late.

For one, a crapped out U.S. Air Force spysat - Defense Support Program spacecraft (DSP-23) - is adrift that could prove troublesome to other high-value satellites.

Back in January 2007, China tested its sharp-shooting anti-satellite skills by taking aim on its own one-ton meteorological satellite — resulting in a huge cloud of ominous clutter.

A little over a year later, an errant American military classified satellite, USA-193, was aced out by a ship-to-space interceptor. That action, explained U.S. officials, was taken to prevent the spacecraft's load of hydrazine from posing a danger to people on Earth.

While much of this is out of sight, out of public mind — not so for a band of do-it-yourself observers — a network of devoted skywatchers that keep close eye on the far away.

Witnesses of the sky

"In my case, I have been tracking satellites since 1957," said Greg Roberts of Cape Town, South Africa. He is credited with pioneering the use of telescopic video cameras to track distant satellites, with outstanding results.

"I have never attempted to work out how much money has been spent on this hobby — but it is quite appreciable," Roberts told SPACE.com. His passion meant adding on a special building to his home just to house the overflowing amounts of radio and optical equipment.

"I have approached this hobby with quite some dedication," Roberts admitted.

Some have a casual interest, simply on the lookout for a space shuttle or International Space Station flyover. Others observe and report what they witness in the sky more frequently, but their output is often of limited scientific value.

Then there are those who observe and report, say the varying brightness of a spacecraft or a rocket body — measurements that can help, for example, determine an object's tumble rate. For the high-roller amateurs, they go after objects not listed by the U.S. Air Force Space Surveillance Network through its Space-Track database. The self-appointed skywatchers make note of an object's position and time as accurately as possible, and then report that data in a useable format.

Several of the best satellite observers use nothing more than binoculars, stop watch and a good star atlas. Then there are those with highly sensitive video cameras mounted to telescopes. Data steaming out of the camera can be recorded on a DVD recorder or direct to a personal computer's hard drive.

Yet another key tool is via the Internet, with Web sites like Heavens-Above providing data on what's coming to your part of the sky, with pass predictions of spacecraft available for any spot on Earth.

A set of highly-skilled skywatchers form the backbone of the amateur tracking group, following some 200 odd objects for which orbital data is not available from official sources, Roberts said.

Since the U.S. Air Force Space-Track listings do not contain every object in orbit, this has resulted in the hobby of scouting for so called "classified" satellites for which no official orbital data is available.

"In many cases these objects are not really classified," Roberts explained. "Simply, in some cases Space-Track has lost the object which might be nothing more than a large piece of debris. However the real serious observer will track these objects using data they have gathered and maintain their own orbital elements to enable future tracking," he added.

Today, the amateur group consists of a few radio observers and about half-dozen seasoned optical observers. SeeSat-L Internet home page is the spot for the satellite patrol to share their observations, a site established in late 1994. SeeSat-L has become an almost indispensable tool for the satellite observer, be it for posting sightings of flares from the solar panels of Iridium satellites, identifying unknown satellites, propellant dumps, rocket engine burns, or re-entry predictions of decaying spacecraft.

"With so few members we are pretty thin as the world is pretty big — but we are slowly expanding and the group is constantly looking for new talent that could expand the network," Roberts said. "Unfortunately the talents required are fairly rare and what has been achieved is quite remarkable. Maybe one day we will have a unified space force that has an active world-wide capability — but that day is not yet in sight," he noted.

Eyes on the prize

A leader of the satellite watching community, Ted Molczan of Toronto, Canada, offers a number of tips for those who want to set their eyes in motion to gaze for objects overhead. Binoculars and a stopwatch are the minimum equipment required, he said.

Beginners can use binoculars of 50 millimeter (mm) aperture, which start at about a hundred bucks. In order to see more closely spaced reference stars, which tend to be faint - as well as more distant satellites - experienced observers prefer 80 mm or larger binoculars, which start at $200 to $300. This equipment must be mounted on a sturdy tripod with a fluid pan head, at an additional cost of $200 to $300, Molczan suggested.

The stopwatch should be able to record the time of more than one observation. Models with as many as 200 memories are available for about $75.

"In recent years, several observers have switched to using digital still or video cameras, combined with telescopes and automated tracking systems, enabling them to regularly observe faint objects at about 25,000 miles (40,000 km) range, in geostationary and highly elliptical orbits," Molczan pointed out.

As for flat out fun, Molczan spotlighted his contribution to discoveries relating to the U.S. Misty 1 and 2 stealth satellites. "Satellites in secret orbits provide the finest test of my observational and analytical skills, and an opportunity to contribute to public knowledge," he said.

Molczan said that the satellite observer network don't perform space surveillance in the normal sense of the term. "However, in a recent year, our group of about 20 observers collectively made nearly 21,000 observations of more than 1,400 objects. This includes approximately 18,000 observations of about 200 objects in secret orbits, for which we are the only regular public source of orbital data," he said.

But is revealing the whereabouts of hush-hush, super-snooper spacecraft a good idea?

"The U.S. government needs to accept [the fact] that many of the satellites it relies on for national security purposes can be easily seen and tracked by amateurs with very modest equipment," responded T.S. Kelso of The Center for Space Standards & Innovation in Colorado Springs. He operates CelesTrak that posts info on the orbits of satellites and spacecraft debris.

"Assuming that U.S. adversaries can't do the same ignores fundamental realities and actually puts U.S. national security at risk, particularly when information on the location of these satellites is withheld from other satellite operators who are trying to avoid close approaches," Kelso said.

The most valuable members of the satellite observing community are those who use their eyes, a stopwatch and star chart, explained John Locker of Cheshire, north-west England.

"These are the real observers who diligently watch the sky and note when satellites pass by or near to visible stars and planets. These records can provide important information allowing the mathematicians in the group to calculate and check orbital data," Locker said. "Very often unlisted — often classified — satellites can be acquired in this way."

Locker said that others in the satellite watching group use everything from binoculars and backyard telescopes to more expensive large aperture optics. "But each and every observation is important," he advised.

For Locker, the main events last year for him was tracking and observing USA-193 before its in-space destruction. Another eye candy happening was catching a glimpse of secret Russian spysat just a couple of days after launch before it was put into a higher orbit, he said.

As for the future, Locker said that "unlike fixed commercial and military observatories, we are more mobile and flexible."

Even in the case of the apparently lost to space American DSP-23 spysat, Locker noted, its meanderings have also been charted by the International Scientific Optical Network — or ISON for short.

ISON involves 18 scientific institutions in various nations, 18 observatories and observation facilities, 25 optical instruments, and more than 50 observers and researchers. Observation results are piped into the Keldysh Institute of Applied Mathematics of the Russian Academy of Sciences. ISON is billed as an open scientific structure and all nations are welcome to participate.

And perhaps that is where the future lies, Locker remarked: "A network of retained observers supporting the work of ISON....who knows? What is certain is that as long as there is something moving out in space, people like us will always be fascinated by it!"

Niche for all levels

Another notable node on the net of amateur skywatchers is Kevin Fetter of Brockville, Ontario in Canada. He recently got his own column space in the local newspaper by spotting the tool bag of goodies accidently dropped overboard by a spacewalker during a recent stroll outside the International Space Station.

Like others, Fetter said it doesn't take much gear to get involved — plop down cash for a good pair of binoculars and a stopwatch and you're in business. "That's how a few observe — but in my case, it cost a lot — over a $1,000 — but worth every cent. I have lots of fun with it. That's what matters to me."

Given the power of the Internet and its global outreach to other satellite spotters, Fetter agreed it's like being part of a unified space surveillance force.

"That's one way of looking at it — considering we make observations and generate orbital data that others can use," Fetter said.

"It's more like people who find joy in the observing hobby/science of satellite watching and sharing their thoughts and observations with others of like mind around the world. At times it can be very exciting," Dorman noted. "There is a niche for all levels of interest in satellite observing. From the casual observer to the most advanced. There's a place for everyone."

But there is a single, solid requirement, Dorman quickly added: "One just has to have the will to look up."