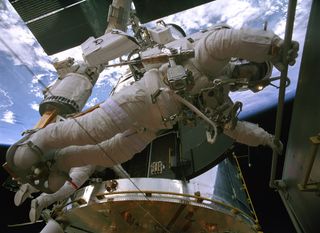 WASHINGTON -There?s a load of deserved praise about the new IMAX screen-o-rama that is ?Hubble3D.? Moviegoers are told the 20-year tale of the Hubble Space Telescope?s trialsand tribulations in superb clarity.

The film,released hits theaters today, is the saga of how astronauts first returned withthe remedy for the once out-of-focus Hubble observatory, followed by an armadaof spacewalkers tending to and upgrading the huge eye on the sky. But Hubble 3D onlywhets the appetite for more "on-location" film shoots in the cosmos.So what other space destinations are feasible?

?Hubble 3D?producer and director Toni Myers has her answer, and it includes finding a wayto reach out beyond out beyond low-Earth orbit with cameras.

"Thefuture is really about image capture," Myers told SPACE.com. And inscoping out that future, it is going to be, sadly she added, the disappearanceof film.

Resolutionis the key and, as yet, digital image capture doesn?t produce the pixel powerof IMAX film, Myers said, "but we?re on it . . . so it?s going tocome." The ability to store digital data, she said, is also rapidlyadvancing.

"Weknow we want to make a film on the moon or on an asteroid," Myersexplained, as well as Mars. "It?s just a matter of the technology catchingup. Obviously, you can get the camera there. But how soon is thequestion."

The otherhalf of the future, Myers continued, is for space applications, specificallypointing to stunning 3D simulated fly-throughs ? like those used in Hubble3D ? that allow moviegoers to embark on a virtual joyride ? but making useof real data.

"There?sa wealth of opportunities there and IMAX takes you there. It takes yousomeplace where you can?t go," Myers said.

Myers saidthat another future space target for IMAX is a new Earth-looking film. Thecamera setting would be the International Space Station, she added, now thatthe cupola has been installed on the orbiting facility ? a dome-like skylightthat provides a magnificent 360-degree panorama.

Given thework on IMAX space stories by Myers ? "HailColumbia," "Destiny in Space" and "Space Station3D" to name a few ? what is her private take home message?

"Iguess what I?ve learned is that the scale of things is way bigger than youthink. But I also think that we better learn to get off this planet. Futuregenerations are going to have to. I think the resources are limited and theyare going to have to find them somewhere else?or not be here anymore,"Myers concluded.

A hallmarkof any space IMAX film is that it?s billed as the next to being there. Thatoutlook is widely held true by astronauts taking a look at the footage theyshot themselves during their space missions.

Still, thereare things missing, not captured by the camera lens.

AstronautMike Massimino has flown in space twice, both missions to the Hubble SpaceTelescope with multiple spacewalks to boot.

"Whenyou are spacewalking, particularly at the altitude we fly to Hubble, you seethe roundness of Earth?s curvature?the planet in its entirety," Massiminotold SPACE.com. "It?s like looking into heaven."

Massiminosaid that he enjoyedthe Earth more during nighttime passes, rather than in daylight. "Thecontrast is incredible. The brightness of the Sun in space is the brightestwhite, a pure white. It?s the brightest thing you can imagine. That?s myimpression."

Getting intodarkness, Massimino said that it?s the exact opposite contrast. "It isdevoid of light. It is the darkest black I have ever experienced."

Massiminosaid he had a few quiet moments during his space strolls, recalling a set ofmental pictures of what he encountered.

"Onethought I had, within my mind?if you were in heaven, this is what you?d seefrom heaven," Massimino recollected. "That was immediately replacedby another thought that this is what heaven must look like. This must beparadise in some odd way. Sometimes I wonder if we?re actually in heaven.Having seen it, this might be as good as it gets right here. The beautyof our planet is so striking."

Intellectually,the future of astronomy includes the search for other habitable worlds,Massimino said. "There?s got to be another one out there. But a thought Ihad up there by just gazing at our planet is how could there be another placelike this? I wouldn?t be surprised if this is it . . . perfection."