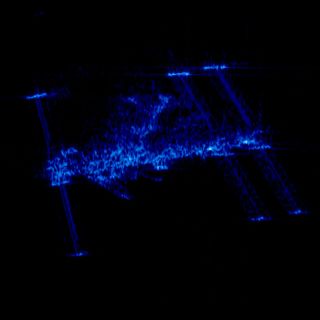 On March 13, 2008, the International Space Station (ISS) passed across the field-of-view of Germany's remote sensing satellite, TerraSAR-X, at a distance of 122 miles (195 kilometers). This radar image of the ISS shows a dense collection of bright spots clearly identifying the outlines of the space station.
(Image: © DLR)

A newly released photo from a German radar satellite has revealed the International Space Station (ISS) like never before, depicting the massive orbiting laboratory as an eerie apparition glowing in blue.

The photo, taken by Germany's TerraSAR-X satellite, shows the space station from above as an incomplete space outpost. It was taken on March 13, 2008, but Germany's space agency released the unique view this month.

"The orbital configuration that provides the opportunity for a picture like this occurs between 10 and 11 times each month, but there is absolutely no risk of a collision because TerraSAR-X and the ISS are on very different orbits," officials with the German Aerospace Center (DLR) said in an update.

The TerraSAR-X view reveals the $100 billion space station as it appeared two years ago, when the outpost did not yet have its final set of huge, wing-like solar arrays. As a result, the station looks off-kilter, with one set of solar arrays on the left side and two on the right.

Since 2008, astronauts have delivered the final set of solar wings, as well as new modules and laboratories. The station is currently home to five astronauts — two Americans, two Russians and one Japanese astronaut.

TerraSAR-X is an Earth-observation satellite that travels around the planet in a polar orbit, and records X-band radar data about the planet using its active antenna. TerraSAR-X is not affected by weather conditions, cloud cover or the absence of daylight.

The station image taken by TerraSAR-X was recorded on March 13, 2008 during a brief, three-second flyby using the satellite's synthetic aperture radar.

A few hours before this image was taken, NASA's space shuttle Endeavour arrived at the space station carrying a storage room for the station's Japanese Kibo laboratory during the STS-123 mission.  At the time, the Russian and American modules, as well as the European "Columbus" laboratory, all had been installed. Six of the station's eight solar panels had already been placed.

The satellite whizzed past the space station as it flew 122 miles (195 km) over the orbiting laboratory. The station typically flies about 220 miles (354 km) above Earth. TerraSAR-X and the station passed each other at a relative speed of about 22,000 mph (34,540 kph).

This ghostly image does not show light reflecting from the surfaces of the space station like an optical photograph.

In fact, radar does not detect surfaces, which deflect the radar beam, at all. Rather, edges and corners reflect the microwave signals transmitted by the radar more strongly. Thus, the solar power generators of the ISS and the radiator panels used to dissipate excess heat appear as dark areas. The ISS, then, is drawn from bright spots which clearly outline the space station. The central element of the ISS, on which modules are docked, possesses a lattice grid structure featuring multiple surfaces to reflect the radar beam, so it stands out clearly.

This image resolves objects of about one meter, with separation of at least 3 feet (1 meter). Structures more closely spaced are merged into a single block. Items smaller than one meter can be identified, if they are very reflective. However, they will be enlarged to at least 1 meter in the image.

Today, the space station's exterior structure is as long as an American football field and it has about the same internal living space as a Boeing 747 jumbo jet.

In February, NASA's shuttle Endeavour visited the space station to deliver a new room called Tranquility and an observation deck that provides stunning views of Earth from space. They left the orbiting laboratory about 98 percent complete after 11 years of construction.

NASA's next mission to the space station is slated to launch April 5 aboard the shuttle Discovery, which will haul a cargo pod filled with new science gear and other equipment to stock up the space station. A new Russian room is due to launch in May on the shuttle Atlantis, with a $1 billion space experiment to follow in July on Endeavour.

The final flight in September will deliver more supplies and leave a storage room permanently attached to the space station. NASA currently plans to retire the shuttle fleet after just four more missions to complete the space station.