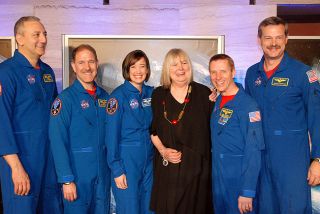 WASHINGTON - The star of the WarnerBrothers' new IMAX film "Hubble 3D" was missed Tuesday evening atthe movie's world premiere at the Smithsonian National Air and SpaceMuseum but for good reason: it was orbiting 350 miles above Earth.

The Hubble Space Telescope's absencenotwithstanding, the celebration saw the film's co-starringastronauts walk the red carpet to see for the firsttime the telescope's 'life story' unfold on the museum's five-story screenhere.

The movie's debut, which tradedHollywood stars for the celestial variety, featured the NASAastronaut crew of the fifth and final spaceshuttle Hubble servicing mission who in May 2009 repaired andupgraded the telescope while also filmingtheir work using an IMAX 3D camera mounted in Atlantis' payload bay.

"It's like experiencing the flight onemore time," STS-125 mission commander Scott Altman toldcollectSPACE.com before the screening. "I can't wait to go thereagain."

Altman, who with spacewalkers John Grunsfeld and Mike Massimino,pilot Greg C. Johnson, and mission specialist Megan McArthur attendedthe premiere, also shot scenes from inside the orbiter using HDcameras, which were then digitally upsized for the large-format film.

"Probably the only frustrating thingabout flying in space, or sad thing, is that you can't share everythingthat you see there with everybody," shared Massiminofrom the red carpet. "This format gives us an excellent opportunityto share this experience with many people."

The seventh film from the IMAX "spaceteam" led by Toni Myers, "Hubble 3D" offers audiences aunique look at the space telescope?slegacy and how it has changed our view of the universe.

"I like them all," Myers toldcollectSPACE.com about her prior six films that were set -- and oftenfilmed -- in space, "but this one is certainly breaking newground in terms of technical challenges."

In addition to incorporating the footage thatthe astronauts captured, Myers collaborated with the imaging team at theSpace Telescope Science Institute in Baltimore, Md., and the AdvancedVisualization Laboratory at the University of Illinois at Urbana-Champagneto use the data returned by Hubble to create a series of scientificallyrealistic flights that "unfold on screen like a guided tour of theuniverse."

Said Myers, "Ithink any film that flies you to the edge of the observable universe is... anew achievement."

Or as IMAX CEO Rich Gelfondput it, "we first took you into space, we looked at the Earth, andnow we look at the edge of the universe."

The deep space scenes aside, the film alsosteps viewers through a series of journeys that occurred much closer tohome -- the NASA shuttle missions that deployed and later servicedthe space telescope. Specifically, "Hubble 3D" pulls fromfootage shot for IMAX's 1994 "Destiny in Space," whichshowed the 1990 deploy of the observatory and the 1993 mission to repairits famously flawed mirror by installing a set of corrective"contact lenses".

"With the disappointments of the first[mirror] problems, and then the difficulties of keeping it alive over theyears as various instruments failed, it is just a constantdrama," said executive producer and IMAX co-founder Graeme Ferguson. "Itmakes for a natural movie."

The premiere, which concluded with acocktail party under a full-scale engineering model of the Hubbletelescope and nearby one of the observatory'sinstruments replaced and returned to Earth by Atlantis' astronauts, drewan invited audience of more than 500, including several members ofCongress and NASA's Deputy Administrator, Lori Garver.

"This [film] really brings to the publicwhat the taxpayers have paid for, not only seeing the research which iswidely distributed through the Hubble's Space Telescope ScienceInstitute, but also to experience it up close and personal," said Garver.

The public will get its chance to see"Hubble 3D" when it opens in IMAX and IMAX 3D theatersworldwide on March 19. Narrated by actor Leonardo DiCaprio(who was unable to attend the premiere), "Hubble 3D" runs43 minutes long.