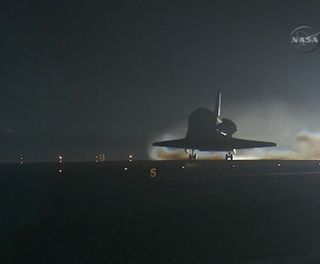 Japaneseastronaut Soichi Noguchi put those new station windows to good use duringEndeavour's landing. He said he could see the shuttle's bright trail as itre-entered Earth?s atmosphere.

?Iwatched the shuttle atmospheric re-entry from Cupola window,? Noguchi posted onhis Twitter page. He has lived on the station since December. ?The view wasdefinitely out-of-the-world.?

The217-orbit flight included three spacewalks to configure the new hardware aswell as brought aboard the parts necessary to successfully repair the station?swater and urine recycling system. Endeavour flew about 5.7 million miles (9.1million km) during the spaceflight.

?Thisis a great mission,? shuttleastronaut Kathryn ?Kay? Hire said Saturday before landing. ?[I] just can?tdescribe how wonderful it was to look out the Cupola and see that wonderfulNode 3 onboard the International Space Station especially as we undocked. We?rejust all very excited about how well things have gone.?

Openedlate in the mission, the Cupola?s panoramicspace windows ? including the largest single pane of glass ever launchedinto space ? exceeded the astronauts? imaginations, leaving them without thewords to describe the view.

?Iwish we could show you that Cupola view because I think all of us are probablygoing to spend the rest of our days trying to describe what it was like,? saidStephen Robinson, who together with fellow mission specialists Hire, RobertBehnken and Nicholas Patrick, as well as pilot Terry Virts, returned to Earthwith Zamka.

Thedome-shaped module is intended as more than just a sightseeing room. During themission, efforts were made to install a workstation to control the ISS?srobotic arms but hardware interference deferred that activity to afterEndeavour departed.

Thoughthe 1.6-ton Cupola received most of the public?s attention during the STS-130mission, it was dwarfed in both size and importance by Endeavour?s primarypayload, the nearly 12-ton Tranquility module. With both additions installed,the space station now weighs nearly 800,000 pounds (362,873 kg).

Namedafter NASA?s historic Apollo 11 lunar landing site, the station?s new Tranquilitymodule will serve as part gym and part life-support equipment center for theoutpost?s crew. The astronauts loaded some of that gym equipment into the newroom while they were visiting the station. A treadmill named after TV comedianStephen Colbert ? who last year staged a campaign to have Tranquility namedafter him ? will be moved in later.

Threespacewalks were conducted by Behnken and Patrick to connect the node and Cupolato the station, including running ammonia coolant lines that had to beredesigned before Endeavour launched. The astronauts also moved an old dockingadapter to the end of the new Tranquility node to protect its end cap and serveas a spare docking port.

Theyeven had time to stage their own weightless version of the WinterOlympics in space and took a congratulatory call from President BarackObama.

NASA?sSTS-130 mission marked the agency?s 32nd space shuttle to visit theInternational Space Station and the 24th flight for Endeavour itself. It is thefirst of NASA?s final shuttle missions this year.

NASAcurrently plans to launch four more shuttle missions to complete the assemblyof the station and stock the orbiting laboratory with more supplies.

Thenext mission, STS-131 is targeted to launch on shuttle Discovery on April 5.The fleet is slated to retire by the end of the year.

Theplan, if approved by Congress, would set aside $6 billion over the next fiveyears to spur development of new commercial spacecraft that could sendastronauts to orbit and the space station, freeing NASA to concentrate on moreloftier goals of sending astronauts to the moon, asteroids or Mars.

Endeavour?sspaceflight also marked the penultimate flight for the orbiter. The youngestshuttle in NASA?s three-orbiter fleet, Endeavour is scheduled to launch on itsfinal mission, STS-134, in July.