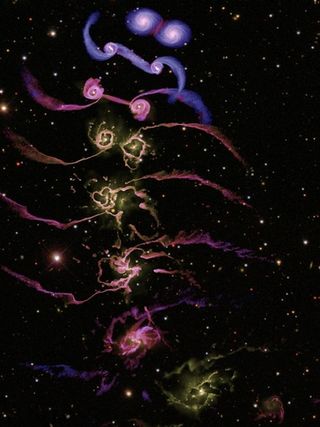 The energy created when black holes merge contributes to star formation while blowing gas to the outskirts of a galaxy, creating a limit as to how much the black hole can consume, a new computer simulation shows.

The work helps confirm what astronomers have increasingly suspected in recent years, that black holes are integral players in the process of galaxy building. It also meshes nicely with several observations.

In the crowded early universe, small young galaxies collided and merged frequently, according to the leading theory of galaxy formation. Most of these nascent galaxies would have had modest black holes. The black holes also merged, scientists figure, leading to supermassive black holes that anchor most large galaxies observed today.

Black holes can't be seen, but they are detected by noting their gravitational effect on the stars and gas in a galaxy.

Black holes have a reputation for sucking in everything, but in fact they lure distant material with no more force than any other object of equal heft; a black hole's mass determines its gravitational effect. The most supermassive black holes typically contain less than 1 percent of the mass of a galaxy.

Yet because black holes are very compact, their gravitational tug on nearby objects is phenomenal.

Gas is accelerated to a significant fraction of light-speed as it spirals inward to a black hole. The gas is superheated into a fourth state of matter called plasma. The plasma emits tremendous radiation, from radio waves to visible light and X-rays. Observations of this radiation provide another clue to the presence of a black hole.

Theorists have said the whole process would create a cosmic wind that would blow material away from the black hole. A Penn State study in 2003 found evidence for this greatest of all winds from distant super-bright galaxies called quasars.

The intense radiation and fog of gas around a quasar prevents astronomers from seeing what's going on inside -- it's like trying to spot the mechanism inside a glaring light bulb -- so firm conclusions about the process are difficult.

In the new simulation, merging black holes consume surrounding gas. But the quasar it generates then blows surrounding gas to the fringes of the galaxy.

"We've discovered that the energy released by black holes during a quasar phase powers a strong wind that prevents material from falling into the black hole," said Volker Springel at the Max-Planck Institute for Astrophysics. "This process inhibits further black hole growth and shuts off the quasar, just as star formation stops inside a galaxy. As a result, the black hole mass and the mass of stars in a galaxy are closely linked."

The simulation meshes nicely with observations that reveal quasars were common in the early universe and are rare in modern times. Theorists have assumed that the quasar phase is relatively brief, and that today's galaxies, many of which are seen to be huge but not dramatically bright, have matured beyond the quasar phase.

"Our results also explain for the first time why the quasar lifetime is such a short phase compared to the life of a galaxy," Springel said.

The simulations are also in agreement with observations suggesting that a galaxy's star content is directly related to its black hole.

"In recent years, scientists have begun to appreciate that the total mass of stars in today's galaxies corresponds directly to the size of a galaxy's black hole, but until now, no one could account for this observed relationship," said Tiziana Di Matteo, associate professor of physics at Carnegie Mellon. "Using our simulations has given us a completely new way to explore this problem."

In the virtual mergers, black holes in small galaxies blow the gas away quickly, so few stars are formed. Larger galaxies have more gas and a more massive black hole, and more stars form.

The results are detailed in the Feb. 10 issue of the journal Nature.

Previous studies have suggested that a quasar's wind would compress gas, forcing a knot of the gas to collapse and form stars. And observations released earlier this year showed that an intense beam of material ejected along the poles of a rotating black hole can also trigger bouts of star formation.