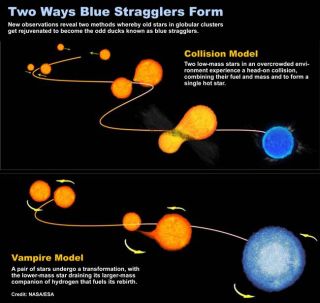 Vampirism and collision are the two ways that blue stragglers, or "rejuvenated" stars, form in globular clusters.
(Image: © NASA/ESA)

Mysteriousold stars that look oddly young found the fountain of youth via two means, newresearch finds. Some rely on vampirism to suck the life out of a companionstar, while others are rejuvenated in cosmic collisions.

The strangestars exist among a tight group of stellar geezers in what's called a globularcluster. The whole setup called Messier 30 ?an ancient knot of stars sitting 28,000 light-years away and within our MilkyWay galaxy ? is thought to have hit the scene about 13 billion years ago, whenthe universe was an infant.

Most of thestars look their age, bloated redgiants that are about to call it quits. But a few, called blue stragglers,seem to have regained their youth. They look very much like hot young things.

"It'slike seeing a few kids in the group picture of a rest-home for retiredpeople," said Francesco Ferraro of the University of Bologna in Italy."It is natural to wonder why they are there."

Fornearly 50 years, astronomers have known of these blue stragglers. The leadingtheory to explain them is vampirism.

Itworks like this: Two stars orbit each other in a tight setup. The less massiveone siphons fresh hydrogen from its more massive companion star, just as avampire would suck blood from a lover. The new fuel causes the smaller star toheat up, growing bluer ? known signs of a stellar hottie.

"Ourobservations demonstrate that blue stragglers formed by collisions haveslightly different properties from those formed by vampirism," said studyteam member Giacomo Beccari from the European Space Agency. "This providesa direct demonstration that the two formation scenarios are valid and that theyare both operating simultaneously in this cluster."

Theresults are detailed in the Dec. 24 issue of the journal Nature.

Theastronomers also found that blue stragglers are much more concentrated towardthe center of the cluster, compared with other stars that are spread throughoutthe cluster.

"Thisindicates that blue stragglers are more massive than the average star in thiscluster," Ferraro said. "More massive stars tend to sink deep intothe cluster the way a billiard ball would sink in a bucket of honey."

Infact the central area of the cluster is quite crowded, so star pairing andcollisions are to be expected. Also, more massive stars near the cluster'scenter are exactly what would be expected from both the vampire model (becauseit involves the heft of two stars) and from mergers resulting from collisions.