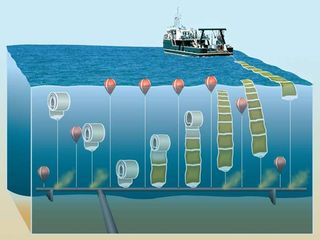 An illustration of an OMEGA ship harvesting algae to turn into fuel.
(Image: © NASA)

NASA may concern itself largely with space exploration, but italso wants to keep Earth on a steady course in the face of rising energy costsand climate change. Now the U.S. space agency has thrown its weight behind aclever method of growing algae in wastewater for the purpose of making biofuel.

The OMEGA system consists of algae grown in flexible plasticbags floating offshore, where cities typically dump their wastewater.Oil-producing freshwater algae would naturally clean the wastewater by feedingon nutrients in the sewage. The cleansed freshwater could then release into theocean through forward-osmosis membranes in the sides of the plastic bags.

"You're concentrating nutrients and releasing extremelyclean water into the ocean," said Jonathan Trent, a bioengineer at NASAAmes Research Center in Moffett Field, Calif. The forward-osmosis membranesonly release fresh water into the ocean, and don't permit salty water tocontaminate the bags.

Trent envisions harvesting the algae with barges every tendays, and then flushing the plastic bags with salt water to clean out anyfreshwater algae that might foul the sides of the bags or the forward-osmosismembranes. The algae would be turned into fuel in a manner similar to usingcorn to make ethanol.

Municipal wastewater pumped into the bags would then startthe cycle all over again.

Such a process would mainly rely on the energy of the oceanwaves to mix the algae, as well as sunlight and carbon dioxide. The offshorelocations and the wide oceans would also have more than enough room to growmassive amounts of algae needed to produce biofuels for an energy-hungryworld.

Algae for a greener economy

Many experts see algae as the biofuel source of the futurefor several reasons. Algae's biofuel yield could range from 1,000-4,000 gallonsper acre each year, compared to just hundreds of gallons per acre annually fromoil palm, sunflower and soybeans, according to a U.S. Department of Energy(DOE) report. The DOE added that algae alone could theoretically take care oftransportation fuel demands for the entire United States.

That early promise has led the DOE to invest inalgae-focused ventures through its new ARPA-E agency, and to put together areport titled the "National Algal Biofuels Technology Roadmap."

Some private companies have tried growing algae in vats orthrough other methods on land. But Trent decided to take advantage of theocean's natural waves and open spaces. His initial investigation drew supportthrough a grant from the philanthropic arm of Google, theU.S. Internet search giant.

"This would ultimately cover acres and acres ofocean," Trent told SPACE.com. He noted that each plastic bag mighttake up as much as a quarter of an acre. The millions of acres required to meetU.S. transportation fuel needs would not take the form of one huge ocean patch,but would instead spread across many locations off the U.S. coasts.

The basic technologies behind the plastic bags andforward-osmosis membranes are well tested, but Trent expects to spend more timeensuring that the system can work efficiently and without problems. Forinstance, plastics have a known weakness to ultraviolet rays from the sun, andso long exposure might represent an issue.

Still, Trent wants to eventually make the plastic bagsbiodegradable. A future source of such biodegradable plastics might even comefrom algae-derived oil.

Fuel for the world

Both NASA and the California Energy Commission have helpedfund the latest round of Trent's work, in which he aims to get a pilotdemonstration up and running. The first experiments might start in closedponds, and then spread to California offshore locations near San Francisco andSanta Cruz.

A U.S. company, Algae Systems of Carson City, Nev., hasalready licensed the NASA tech, and plans to deploy its own algae bioreactorssomewhere off the coast of Tampa Bay, Florida. Trent would like to see thetechnology spread among companies as an open-source solution.

"I don't want to see any one company that owns thetechnology," Trent said. He has already begun discussing his work withinternational delegates at the United Nations Climate Change Conference hostedin Copenhagen, Denmark.

One possible future plan would combine the algae-growthsystem with a gigantic offshore wind farm being built by Germany, Sweden andDenmark. Wind power could then provide lights to keep algae growing underwaterand during the nighttime hours ? a fitting vision for the sustainablefuture of spaceship Earth.