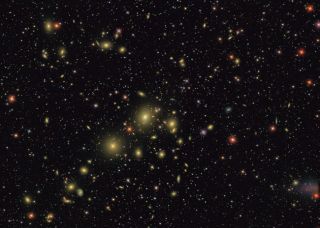 An orbiting X-ray observatory has found the largest knownreservoir of rare heavy metals in the universe.

The lightweights of the periodic table, hydrogen and helium,are the most abundant elements in the cosmos ? they're the key fuels of stellarengines.

But more familiar to us Earthlings are the heavierelements that make up the rest of the table, though these heftier elementsare rare in the universe at large.

Recently, astronomers used the Suzakuorbiting X-ray observatory, operated jointly by NASA and the Japanese spaceagency, to discover the largest known cache of rare metals in the universe todate.

Suzaku detected the elements chromium and manganese whileobserving the central region of the Perseus galaxycluster, which lies 225 million light-years from Earth. The metallic atomsare part of the hot gas, or intergalactic medium, that lies between 190 galaxieswithin the cluster.

The portion of the cluster within Suzaku's field of view issome 1.4 million light-years across, or roughly one-fifth of the cluster'stotal width. It contains a staggering amount of metal atoms: The amount ofchromium is 30 million times the sun's mass, or 10 trillion times Earth's mass.The manganese reservoir weighs in at about 8 million solar masses.

The Suzaku study data show it took some three billionsupernovas to produce the measured amounts of chromium and manganese. And overperiods up to billions of years, superwinds carried the metals out of thecluster galaxies and deposited them in intergalactic space.

Scientists hope to use this newfound trove to learn moreabout star formation and gain a better understanding of how, when, and wherethe heavy elements formed.

"By measuring metal abundances, we can understand thechemical history of stars in galaxies, such as the numbers and types of starsthat formed and exploded in the past," Tamura said.

The Suzaku findings were detailed in a recent issue of TheAstrophysical Journal Letters.