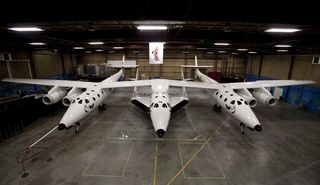 MOJAVE, Calif. ? It has been pre-sold as an "out ofthis world premiere" ? and you can't get more off-world than unveiling aspaceliner built to whisk customers to the edge of space.

SpaceShipTwo is making its debut here at about 8:30 p.m. or9 p.m. ET (5:30 ? 6 p.m. PT) today. The super-slick looking rocketplane will be showcased as the world's first passenger-carrying commercialspacecraft. The enterprise is under the financial wing of well-heeled U.K.billionaire and adventurer, Sir Richard Branson.?

The scene here at the Mojave Air and Space Port is partdesert scenery, part festival, part Hollywood glitz ? but full-timeentrepreneurial space spunk. It's home base for several privately held ventureseager to change the landscape of accessto space.

Today's festivities are being held within a specially-built andspectacularly lighted complex that includes two huge domes, tents and otherstructure. Some 800 dignitaries and media folks are gathering here for the celebratedunveiling.

On display too is SpaceShipTwo's mothership, theWhiteKnightTwo.

Both vehicles have been designed and built by ScaledComposites, based at the Mojave Air and Space Port and founded by rebel aerospacedesigner, Burt Rutan, now Chief Technology Officer and Chairman Emeritus of theaerospace firm.

The WhiteKnightTwo aircraft, on its own, is a milestone in design.That craft was revealed to the public in July 2008 and has been undergoingextensive testing ? already chalking up 22 flights. The plane, looking like aflying catamaran, is the world's largest all carbon composite aircraft and manyof its component parts have been built using composite materials for the veryfirst time.

But now it's showtime for SpaceShipTwo.

The suborbital SpaceShipTwo will hold six passengers and twopilots. It has received a final buff for its early evening, red carpet entrance.Throughout 2010, the rocket plane will undergo a far-reaching andall-encompassing test agenda.

"This is the world's first manned commercialspacecraft. I think for 40 years people have dreamed of this...but they haveincreasingly believed that it just wasn't going to happen," said WillWhitehorn, president of VirginGalactic.

Whitehorn flags economics over those years that havedefeated commercial spaceflight, "because there's been no direction shownin government rocketry towards the kind of future of people being able to gointo space regularly and easily," he told SPACE.com.

The models of the space plane have never done it justice,Whitehorn observed. "When people see for themselves SpaceShipTwo?thisspaceship looks robust, fit for purpose and looks very safe. It looks likesomething you'd imagine getting into. When you see it?it kind of looks justright."

A take away message from the event today, Whitehorn added:

"It's really here. It has been done. This has been fiveyears of extremely hard work. The result is something quite utterly unique. Forus, space tourism is a good goal in its own right because it will create thecircumstances of regularity and safety. And that will give the confidence forthe kind of wall of private sector investment I do see coming into space launchin the future."

For the crowds gathered here today, there is expectation ofviewing a milestone in aerospace technology, the dawn of privatespace launch, for humans, science research and payloads.

The Mojave Air and Space Port was designated by the FederalAviation Administration's commercial space office as the nation's first inlandspaceport and played host to the world as Scaled Composites qualified and wonthe $10 million Ansari X Prize at the sprawling complex ? the birthplace of thefirst human-rated commercial space program in the world.

"This event underscores once again that the privatesector with small teams can achieve rapid quantifiable results. Something onthe order of 100 people produced these two new craft, SpaceShipTwo and theWhiteKnightTwo," Witt explained.

It has been historically proven, Witt said, that humanityrequires risk takers to open new frontiers leading to safety breakthroughs forall humankind. That goes for ocean as well as air exploration, he added.

"Magellan or Lindbergh come to mind...one opened thesea to world exploration, the other put a spotlight on air travel," Wittsaid. "It is time for the private sector to commercialize access to spacein a big way."

No longer a paper promise

Witt said that he is heartened to see people of means andvision come together with those that have demonstrated engineering genius. Thatmelding yields bold new concepts.

"The dawn of commercial space is upon us," Landeenetold SPACE.com. "This is no longer a paper promise?but hardware andinfrastructure that changes the way we will access space forever."

For Landeene, The SpaceShipTwo roll-out "signifies thebirth of a new mode of transportation."