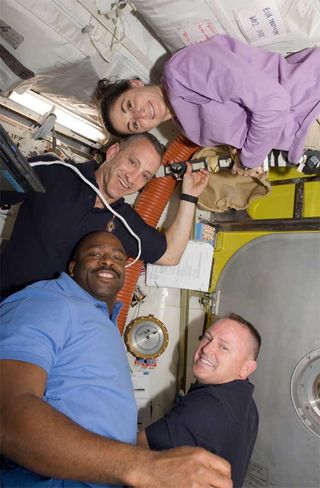 Astronautsaboard the linked shuttle Atlantis and International Space Station took somewell-deserved time off Sunday to rest up from their mission to stock up theorbiting lab, with one spaceflyer overjoyed after hearing news of the birth ofhis new baby daughter.

Atlantisastronaut Randy Bresnik kicked off the day by announcing that his wifeRebecca had given birth overnight to a healthybaby girl.

Bresnik,and his crewmates, had been waiting for two days for news of the birth, whichwas initially expected Friday. The Bresniks named the baby, their second child,Abigail Mae. They also have a son, Wyatt, who is 3 1/2.

"It isa fantastic event for the Bresnik family," said lead station flightdirector Brian Smith in a Saturday briefing before the birth.

Today, Atlantisastronauts spent part of their Sunday resting up and discussing theirspaceflight with reporters. They will also prepare for their mission?sthird and last spacewalk, a 6 1/2-hour excursion by Bresnik and crewmate RobertSatcher, Jr., which is set for early Monday.

Atlantis? sixSTS-129 crewmembers arrived at the orbital outpost Nov. 18, joining six otherspaceflyers already on the station for long-term missions of their own.Everyone is getting some down time Sunday, Smith said, though some astronautson both crews will work part-time to transfer equipment from the shuttle to thestation and back, and to investigate false alarms that have been plaguingthe orbital outpost lately.

"We'llget some more insight into what's going on," Smith said of the testsplanned for Sunday. Saturday night was a quiet one for the astronauts after twostraight days of interrupted sleep due to the alarms.

Atlantisastronauts have completed twospacewalks and a host of robotics work so far. Their mission is a supplytrip, outfitting the station with large spare parts to have on hand in casesomething breaks.

Today willlikely be a quiet day, allowing the Atlantis astronauts to rest and enjoy beingin space before powering through the rest of their mission, including anotherspacewalk scheduled for Monday.

Atlantisand her crew are slated to depart the orbiting laboratory Wednesday and returnhome to Earth Friday, the day after Thanksgiving.

While sixastronauts, led by commander Charlie Hobaugh, launched on the shuttle lastweek, seven are scheduled to ride Atlantis back to Earth. NASA astronaut NicoleStott, who's been serving onboard the station as a flight engineer for aboutthree months, is due to cap off her long-duration trip and join the crew forthe ride home.

Stottcelebrated her birthday in space on Saturday. "Out of this world birthday today!" she wrote viaTwitter, under the name "Astro_Nicole."