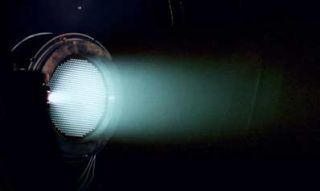 Hopes are fading for the return of the Hayabusa space probeafter another of its ion thrusters failed last week, leaving just onealready-damaged engine to guide the hard-luck spacecraft back to Earth,potentially with the first precious samples of an asteroid.

Thruster D's failure was caused by a voltage spike due toproblems with a neutralization vessel. A similar anomaly triggered the failureof another engine in 2007.

The fourth ion propulsion unit,called Thruster C, was already shut down after signs that it also might succumbto high voltage damage. Engineers are now testing that engine to determine ifit is capable of long-duration firings.

Ion engines are more efficient than conventional chemicalthrusters because they use less fuel and can operate continuously for thousandsof hours.

Hayabusa's thrusters have accumulated almost 40,000 hours ofburn time since theprobe launched in May 2003.

The engine that failed last week had been firing sinceFebruary to bend the 950-pound probe's trajectory, allowing it to reach Earthby June 2010 and release a small re-entry capsule possibly carrying samplesfrom asteroid Itokawa.

In February, JAXA officials said Hayabusa needed toaccelerate by about 900 mph toreach Earth. Thruster D was slated to continue operating until March, whenHayabusa would begin coasting toward its parachuted return over the desert ofAustralia.

During a failed sampling attempt in November 2005, Hayabusamade an unplanned landing and spent up to a half-houron Itokawa, becoming the first spacecraft to take off from an asteroid.

Although telemetry showed Hayabusa likely did not fire itsprojectile while on the surface, scientists were hopeful bits of dust orpebbles found their way through the funnel and into the sample retrievalsystem.

Hayabusa was later stymied by a fuel leak and groundcontrollers temporarily lost communications with the spacecraft, which is aboutthe size of an average refrigerator.

Controllers labored to overcome the issues, which werecompounded by the loss of two orientation-controlling reaction wheels and powercells in an electrical battery.

The craft's departure from Itokawa was delayed a yearbecause of the problems, postponing its return to Earth from 2007 until 2010.