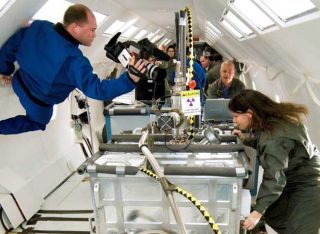 Space explorers have yet to get their hands on the replicator of"Star Trek" to create anything they might require. But NASA hasdeveloped a technology that could enable lunar colonists to carry out on-sitemanufacturing on the moon, or allow future astronauts to create critical spareparts during the long trip to Mars.

"They get up there, and all they have is time andimagination," said Karen Taminger, the materials research engineer headingthe project at NASA?s Langley Research Center in Virginia.

Taminger's project has undergone microgravity tests aboard NASA's"vomit comet" aircraft. Now she hopes to get EBF3 scheduled forlaunch to the International Space Station, so that space trials can commence.

Shaping metals at will

EBF3 requires a few crucial components: power for its electron beam, avacuum environment, and a source of metals. While Star Trek?s replicatorcould work without a supply of subatomic particles, reality is a different story.

"It'd be nice if we could build something from nothing, but itdoesn't work that way," Taminger told SPACE.com.

For EBF3, metal wires continually feed into the tip of an electron beam.The beam melts the wires and applies them carefully on top of a rotating plateto build an object up slowly, layer by layer.

"We can change the composition on the fly," Tamingerexplained. "You can add alloys of different chemistries and then adjustthe speed that you feed the wires, and that would change the chemistry of theparts we build."

The flexibility of the manufacturing could also embed fiber optic cablesinside a solid piece of metal, either for use in communication or formonitoring stresses within the manufactured part.

Major aerospace manufacturers have already begun running thousands ofstrength tests with the EBF3 device to see whether it can produce certifiedparts for engines and airframes, researchers said. They foresee cost savings ofup to $1,000 per pound of manufactured parts, compared to the usual forging andmachining methods that require a 6,000-pound block of titanium to produce a300-pound part.

Early "vomit comet" tests on NASA's C-9 aircraft showed thatEBF3 could work well in a zero-g environment. Taminger and her team managed tobuild a number of parts that looked exactly the same as parts built on Earth,down to the microstructure scale.

Some researchers had predicted that the method would fail to produceanything but "ball bearings," or liquid metallic spheres in zero-g.But the wire feeders successfully deposited the metal layers onto the rotatingplate as usual, except for the occasional misaligned wire that would create agrowing sphere on its end.

"We learned a lot more when things went wrong," Taminger said."When things go wrong in zero-gravity, you just don't have as muchexperience to guess what would happen."

The effects of zero-g often comically exaggerated any mistakes, andallowed the team to improve the overall process for Earth manufacturing aswell. They even ran a few experimental tests going from zero-g to two gees asthe C-9 aircraft would pull out of its steep dive.

The big next step for EBF3 involves going to the space station. Tamingerhas already gotten the device down to a "suitcase style experiment"that fits within a volume of less than eight cubic feet, but still needsfunding and a possible slot aboard one of the remaining space shuttle missions.The device could also go up on a contracted NASA flight with the Russian Soyuzrockets, or even a private launch.

Going to the space station means that EBF3 can take advantage of thevacuum environment in space, and sit on an outside rack -- perhaps the"back porch" of Japan's Kibospace lab.

Beyond low-Earth orbit, such new manufacturing technology could enablespace colonists to use local metal resources mined fromthe moon, Mars or in the asteroid belt.

Past simulations have also shown that spaceships would require manyspare parts for the long journey to Mars, because different parts failed duringeach simulation. But the total weight of parts that failed during each run wasroughly the same, which suggests a Mars mission could simply take along metalfeedstock and an EBF3 device.

"If we've got a broken part, we can even repurpose that intofeedstock, or can we mine new material," Taminger said. "The shortterm solution is that you bring along the material you need, but you don't needto bring the parts that you need."

The EBF3 device probably won't churn out spare parts immediately, if itreaches the space station. But astronauts who have seen the device in actionhave expressed excitement over the idea of making their own tools, 21st centurypioneer style.

"They can build a shovel, or a clamp or a widget, or whatever theymight come up with," Taminger said. "They're not just stuck with thetoolbox they brought along."