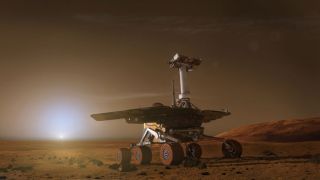 An artist's depiction of a Mars rover: 'They are the closest I think that you can come to what it would be like standing there,' says MER principal investigator Steve Squyres of Cornell University.
(Image: © National Geographic)

At times, it seems like NASA's Mars rovers Spirit and Opportunity will last forever on the red planet.

Since 2004, the twin rovers have explored different parts of Mars with amazing longevity that has astounded scientists almost as much as the data the robots have beamed back to Earth. Spirit and Opportunity have shed light on the history of water on Mars in the distant past, explored Martian hills and meteorites, and even rolled inside craters to probe ever-deeper into the planet's geologic history.

Today, Opportunity has added yet another Martian meteorite — the third of its mission — to its grab bag of red planet discoveries. Opportunity began heading toward the lumpy rock, which has been named "Shelter Island," on Oct. 1 and is reaching out to study the meteorite using its robotic arm. It is eventually headed to a distant, giant crater called Endeavor.

Spirit is stuck up to its wheel hubs in a Martian sand dune that has thwarted all escape attempts to date. Engineers are still trying, though, and the rover's power and science instrument systems are in good shape.

Mars rover engineer Ashley Stroupe, who works on the mission at NASA's Jet Propulsion Laboratory (JPL), discussed Spirit and Opportunity's exploits with SPACE.com readers during a recent Live Forum. Here are some of Stroupe's answers to reader questions on the rover mission's challenges and what it's like to drive two cars on Mars:

Has the Mars Rover team examined the possibility of using the Spirit rover's instrument arm to maybe help push it out of its current predicament?

Dr. Stroupe: Several people have questions about using the IDD [Instrument Deployment Device, or robotic arm] to help get Spirit out. The IDD is very low in mass and was only designed to exert the forces needed to firmly place instruments on science targets.

That means moving it around barely shifts the rover's center of gravity and attitude. The arm can only exert at most about 20 pounds of pressure, which is only 13 percent of what would be needed to lift the rover's mass on Mars. With that level of force we again could only minimally affect the rover's attitude, and would not be able to move rocks of any significant size. And if we tried, we would definitely risk damaging the instruments or the IDD itself. If all else fails, we may give one of these strategies a try and hope that the small difference is enough, but these are all very risky, and so far down our list of options.

Do you have a time frame in mind for trying to get Spirit un-stuck? Are there budgetary issues to consider as well or will the project keep going as long as Spirit responds?

Dr. Stroupe: We do not have any particular time frame in mind. We're driven by being sure we have the absolute best plan we can have in order to maximize our chances of success. This is likely to be at least a few more weeks. At this point, the success of the plan is our primary driver, not calendar and not budget.

We are still finishing up our ground testing and haven't yet started driving on Mars. That is probably at least a few weeks away.

How much easier is it to plan the next day's drive now than in the beginning?

Dr. Stroupe: The rovers are actually robots, and as such are highly autonomous. We give them an entire day's worth of activities at once (in the morning) and then at the end of the day they call home and let us know how they did. During the day, they execute the plan, and keep themselves safe from conditions that arise that were not foreseen. Once in a while, during an emergency, we command the rovers real-time, but this almost never involves driving or using the robotic arm.

We have developed a lot of experience and a lot of tools to help us since the beginning of the mission. However, every day and every place is different and brings new challenges. While I wouldn't say it has really gotten easier, I think I can say it is has gotten a lot more efficient.

Do Spirit and Opportunity handle differently when you command them from Earth, or is it more like once you've driven one rover, you've driven them all? And do you have a favorite?

I do have a favorite — Spirit is my favorite — but I love Opportunity too!

Would it be possible, given Opportunity's experience with exploring inside craters, that the rover could hunt for water ice at the bottom of an enormous crater like Endeavor, when it arrives?

Dr. Stroupe: Anything is certainly possible, though I don't think Opportunity is quite at the latitudes where they're finding water. Given the thin Martian atmosphere, anything on the surface is long gone and Opportunity can't dig very deep. So it isn't very likely, but not impossible!

From the technical perspective, what lessons has the team learned from rovers? Will this influence the design of future planetary rovers like Mars Science Laboratory?

Dr. Stroupe: That is a very tough question to answer because we have learned a lot. We have really learned much more about the challenges of driving, and what works well on different types of terrain. We have also learned how to drive aging rovers that don't have full capabilities anymore - this is really an entirely new field of robotics because here on Earth we just fix them when they break.

Unfortunately most of these lessons are too late to incorporate into our next rover, which is already well into production. But these will help us operate MSL and will be factored into future mission designs.

What was the single most exciting event that you participated in during your Mars rovers project?

Dr. Stroupe: Wow this is a very tough question because there have been a lot! Personally, my first drive on Mars was very exciting for obvious reasons. Also, the day we discovered the first real evidence of wide-spread water at Spirit's landing site in Gusev crater changed the way we all think about Mars, which was very exciting.

Would it be possible to have the second rover Opportunity steer towards Spirit in the attempts of dislodging it with a bump or a side-swipe, or would it be too risky or time-consuming to attempt this?

Dr. Stroupe: The rovers are on completely opposite sides of the planet. Unfortunately, it would take many, many years to drive that far at 200 meters a day. No AAA on Mars!

How surprising has it been to see the rovers last such a long time, and what are the biggest dangers to their longevity now?

Dr. Stroupe: Honestly, it is very surprising. While we knew they were designed and built to the absolute best of our ability (and we have a lot of very talented and smart people here!), Mars is a very dangerous place. The biggest surprise, and one without which we would not still be on Mars, is that it can also be friendly. The Martian winds have kept the solar panels clean, and without that we would have long ago passed the time when we could no longer make enough power to survive.

At this point in their lives, it is impossible to tell what might fail next. Many thing we can learn to work around (like the motors on the arm and wheel that have already broken) but other things we might not be able to work around. It depends on how it breaks, when, and where.

How large is the team that drives Spirit and Opportunity? Do you have to train with the simulator on Earth in a sort of rover Driver's Ed? Can you give us an idea what it feels like — if you ever think about it — to actually be driving a car on Mars?

Dr. Stroupe: The team is still fairly large, we probably have about 20 people working on each rover each day that we plan. For driving, we do have very good simulators that we use to test our sequences before we send them to the rover, and we also use this for training. It takes a long time to be fully qualified and get your Mars driver's license.

As for what it feels like - it's really just awe inspiring. Probably the closest I'll ever get to being an astronaut. Going to new places and being the first human eyes to see them is profound and hard to describe. It's the best job I could imagine.