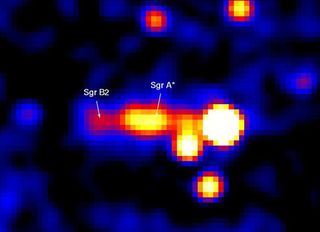 The site of the Milky Way's central black hole (Sgr A*) is noted along with Sgr B2, which has been lit up by the eruption.
(Image: © ESA, M. Revnivtsev (IKI/MPA))

An outburst of energy emanated from the black hole at the center of the Milky Way Galaxy just 350 years ago Earth-time, astronomers announced Wednesday.

Though the eruption was seen only indirectly, a similar one could occur in the future and would be detectable by space-orbiting telescopes. The finding confirms suspicions that the relatively calm black hole is not always quiescent.

Most large galaxies contain a central black hole. When gas spirals in toward such an immense gravity sinkhole, a portion of the gas is consumed while some is spat back out. Along the way, the material is superheated and gives off X-rays and other radiation in a highly turbulent region. This causes the cores of very active galaxies to shine brilliantly.

The Milky Way, however, seems to be on a diet. Other than some intense radio emissions, it's central black hole, called Sgr A* (pronounced 'Sagittarius A star') emits surprisingly little.

The new study, using data from the European Space Agency's orbiting Integral observatory, found that compared to today, the black hole released nearly a million times more energy during the outburst, which lasted about a decade.

The radiation storm moved away from the black hole at the speed of light, but technology was not able to witness the event at the time. The eruption was detected now because it is currently interacting with a cloud of hydrogen gas that's 350 light-years from the black hole. A light-year is the distance light travels in a year, about 6 trillion miles (10 trillion kilometers).

Figuring out where the radiation came from is a bit like spotting oversized waves on a sunny beach and tracing their origin to a hurricane way out in the Atlantic, measurably away in time and space.

X-rays and gamma rays spat out from the black hole are now "washing ashore" on the gas cloud, which is known as Sgr B2. In a convenient cosmic twist, the cloud absorbs and re-emits the radiation in a characteristic manner, sending some of it right at us.

"About 350 years ago, the region around Sgr A* was literally swamped in a tide of gamma rays," said study leader Mikhail Revnivtsev of the Space Research Institute in Moscow and the Max Planck Institute for Astrophysics in Germany. "We are now seeing an echo from a sort of natural mirror near the galactic center -- the giant cloud Sgr B2 simply reflects gamma rays emitted by Sgr A* in the past."

The glowing of the gas cloud was first noted by X-ray astronomers. The analysis of Integral's gamma-ray data allowed Revnivtsev's team to reconstruct the relationship of the event to the previous eruption of the black hole.

The researchers expect the Milky Way's black hole will become bright again "in the foreseeable future." If such an eruption occurs, it will be the first notable change in the black hole since X-ray and gamma-ray telescopes were in position above Earth's atmosphere to record the activity.