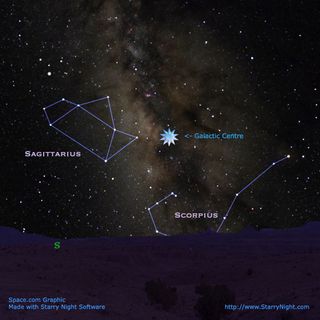 The center of our galaxy lies hidden from our view behind clouds of opaque dust, just off the end of the 'teapot' in Sagittarius. From midnorthern latitudes, look south around midnight to see the Milky Way's central bulge. This works best from dark-sky locations; city observers might have a hard time seeing anything due to the light pollution.

The moon is at new phase on Sept. 18 and during this upcoming week will appear as a gradually diminishing crescent of light in the after midnight-hours, and won't be much of a hindrance to stargazing.  This combined with the fact that at this particular time of the year the hazy skies of summer are giving way to clearer skies and cooler overnight temperatures means that this is an optimum week to check out the beautiful summer Milky Way.

As soon as darkness falls, it becomes evident as a wide glowing arch of variety and beauty, stretching across the sky from the northeast to southwest.

Sweep with binoculars from the Scorpion's tail, through the Summer Triangle, and then down to Cassiopeia and Perseus.  You'll find concentrations of stars, clusters, large apparent gaps (such as the "Great Rift" in Cygnus), and more stars than you probably thought existed.

Unfortunately, because of the tremendous increase in light pollution over the past 35-years, the majority of our current generation has never really seen the night sky in all its grandeur.  Indeed, the Milky Way has been one of the chief victims of atmospheric pollution – by light and other factors.  In most major metropolitan areas, there is very little hope of ever seeing this broad path of light at all.

However, a few years ago, I stumbled across an old observing logbook of mine where I noted that on the night of Aug. 30, 1976, I was able to glimpse the bright stretch of Milky Way that runs through Cygnus from of all places, the Throggs Neck section of The Bronx!  It was one of those very special evenings, so rare in the summertime, with unusually low humidity and crisp, very transparent skies.

Sadly, I should point out, that even if the same weather pattern were to recur tonight, I wouldn't be able to repeat my 1976 observation, because the junior high school across the street from where I used to live has since installed brilliant security lighting on its roof.  In addition, nearby high-pressure sodium vapor streetlights add their own garish illumination to such a degree that the general surroundings are bathed in a sort of artificial twilight; it's now so bright that you can readily read the fine print in a newspaper in the middle of the night, if you were so inclined.

Our eyes have some detail-discerning properties that not even the best long-exposure photograph can match.  This advantage is considerable in the case of the Milky Way, which has such great extent that it does not require a telescope. I can recall with great fondness one particular night nearly 35-years ago, spent under the dark skies of upstate New York's Adirondack Mountains where I spent a considerable amount of time savoring the Milky Way in all of its magnificence.

So clear was the sky, that rather than appearing as a filmy band of light, the Milky Way appeared granulated in texture, and glowed so bright that it actually cast faint shadows!

I must now confess here, however, that even though I had my trusty 7 x 35 wide-angle binoculars, I hardly used them at all that night, except to pick out deep-sky objects (star clusters or nebulae) of interest.  Looking at Via Lactea (the Milky Way's Latin name) through binoculars – except to view certain highlights – is a kin to closely scrutinizing a painting with a magnifying glass, which only reveals the coarse canvas, and not the actual art itself.

A long-time friend of mine and a well-known authority on comets, John Bortle, assiduously observes the night sky from Dutchess County, New York.  Back in 2001 he developed a nine-point scale which allows a person to judge just how dark (or bright) their local sky is.

For the kind of sky that now exists around my old stomping grounds in The Bronx, Mr. Bortle would likely call it a "Class 9."  Specifically defined: The entire sky is brightly lit. Many stars making up familiar constellation figures are invisible, and dim constellations such as Cancer and Pisces are not seen at all. The only celestial objects that really provide pleasing telescopic views are the Moon, the planets, and a few of the brightest star clusters (if you can find them).
People who live up to 50 miles from a large metropolitan area probably have a "Class 5" sky on the Bortle scale.  That's a sky where the Milky Way is very weak or invisible near the horizon and looks rather washed out overhead. Light sources are evident in most if not all directions. Over most or all of the sky, clouds are quite noticeably brighter than the sky itself.

People who live in a rural location, out to 75 miles or more from a major city likely have access to a "Class 3" sky: Some indication of light pollution is still evident along the horizon, but now the Milky Way appears quite noticeable and more complex.  Your telescope is vaguely apparent at a distance of 20 or 30 feet.

But for the ultimate in skywatching, there is the "Class 1" sky . . . the kind that I enjoyed in the Adirondacks all too many of those years ago: From such a sky the Milky Way is capable of casting obvious diffuse shadows on the ground. The presence of Jupiter or Venus in the sky actually hinders your attempt to adapt to the darkness. Airglow (a very faint, naturally occurring glow most evident near to the horizon) is readily apparent. If you are observing on a grass-covered field bordered by trees, your telescope, companions, and vehicle are almost totally invisible.
Or as Mr. Bortle so eloquently put it: "This is an observer's Nirvana!"