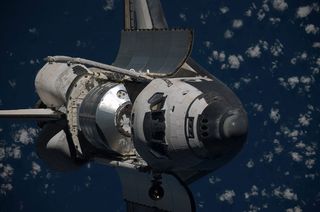 This is one of a series of 800mm survey digital still photographs of the Space Shuttle Discovery as it performed a full 360-degree backflip on Aug. 30, 2009 just before docking during the STS-128 mission.
(Image: © NASA.)

Astronauts aboard the space shuttle Discovery are preparing their spacecraft for a planned Thursday landing, with one spaceflyer bracing himself for the tug of Earth's gravity after living without it for nearly two months.

Discovery is poised to land Thursday evening at NASA's Kennedy Space Center in Florida after delivering tons of cargo, science equipment and other gear to the International Space Station. The shuttle's seven-astronaut crew tested Discovery's thrusters and other control systems to make sure the spacecraft is ready for landing.

One astronaut in particular — NASA spaceflyer Tim Kopra — is eagerly anticipating the trip back to Earth after living aboard the space station for about 55 days. Kopra said he's looking forward to seeing his wife and two children — and maybe a sip of beer — when he returns home. He believes he's prepared himself well for life on Earth once more after weeks of floating in weightlessness.

"I think I feel 100 percent ready to come home physically because of the support we received from the ground with really tremendous exercise equipment," Kopra said before leaving the space station. He will return to Earth in a reclined position as Discovery lands to ease his return to gravity.

Discovery undocked from the station Tuesday and has two chances to land in Florida Thursday beginning at 7:05 p.m. EDT (2305 GMT). The potential for thunderstorms near NASA shuttle landing strip at the Kennedy Space Center is the only concern. Skywatchers in the United States and southern Canada have a few chances tonight to spot the two spacecraft as they fly overhead.

Mission Control gave Discovery's heat shield a clean bill of health late Wednesday and cleared the spacecraft for landing. Shuttle astronauts inspected their heat shield twice to be sure it was in good shape during the mission. NASA has kept a close eye on shuttle heat shield integrity since the 2003 loss of Columbia and its crew due to wing damage.

Engineers are also trying to identify a small object seen drifting out of Discovery's payload bay during today's systems checks. The astronauts described it as a ribbon-like object and Mission Control said it poses no threat to the shuttle or its crew.

Discovery blasted off Aug. 28 and spent nine days linked to the space station while all 13 astronauts on both spacecraft moved more than eight tons of cargo into the orbiting laboratory. Science equipment and food were some of the big-ticket items on the delivery list.

"We're pretty fat with supplies now thanks to you," station astronaut Michael Barratt told Discovery's crew after undocking Tuesday. "And we're in better shape to carry on the work that we're here to do."

Discovery is also returning with Buzz Lightyear, a 12-inch toy from Disney's film "Toy Story" that has lived aboard the station since May 2008. The toy flew to the station as part of an educational program between NASA and Disney, and will get a tickertape parade at Walt Disney World in Florida after it returns to Earth.

Shuttle astronauts performed three spacewalks to replace a massive coolant tank outside the station among other tasks. They also delivered a $5 million treadmill named after TV comedian Stephen Colbert.

Colbert won the naming rights to a new space station room earlier this year in an online NASA poll, but the space agency named the module Tranquility - after the Apollo 11 moon base - instead to mark the 40th anniversary of the first manned moon landing.

Astronaut Nicole Stott, who replaced Kopra on the station's crew, will help build the COLBERT treadmill later this month. But first, she and her crewmates must await the arrival of a brand new Japanese cargo ship slated to arrive Sept. 17.

Station astronauts expect to get great views of the new cargo ship when it arrives, just as Discovery's crew received a stunning vista of the space station with the shuttle undocked Tuesday.

"As you fly away from space station, you really marvel at the fact that we have this engineering wonder hovering 220 miles above the world," astronaut Danny Olivas radioed Mission Control late Tuesday. "It's really unbelievable."