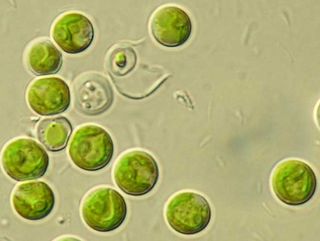 One of the phototrophs used in the experiment was Chlorella vulgaris.
(Image: © Charles University in Prague)

Adinosaur-killing asteroid may have wiped out much of life on Earth 65 millionyears ago, but now scientists have discovered how smaller organisms might havesurvived in the darkness following such a catastrophic impact.

Survivalmay have depended upon jack-of-all-trades organisms called mixotrophs that canconsume organic matter in the absence of sunlight. That would have provedcrucial during the long months of dust and debris blottingout the sun, when plenty of dead or dying organic matter filled the Earth'soceans and lakes.

"Mixotrophsare very good at stabilizing situations by using whatever resources are there,and can often provide what resources there aren't," said Harriet Jones, abiologist at the University of East Anglia in the UK. "They're very goodat coping in extreme environments, and enabling other organisms tolive."

Jones andher colleagues tested the limits of mixotrophs by subjecting them to six monthsof low light or complete darkness. The mixotrophs not only thrived, but alsosurprised researchers by helping sunlight-dependent organisms also survivepitch black conditions.

Scientistshave long debated the overall impact of the K-T extinction that may haveheralded the end of the dinosaurs, but most researchers agree that such anevent would have thrown up enough dust and debris to darken Earth's skies forabout six months. A lack of sunlight would have killed off a majority ofplants, eliminating the food supply for animals higher up the food chain.

Manyscientists assumed that even smaller organisms would struggle just to stayalive during months of almost complete darkness. Some previous studies evenlooked at how some organisms such as mixotrophs can survive low light and lowfood conditions. But no one had tried to test how well mixotrophs would survivethe catastrophic environment following something such as the K-T event, Jonessaid.

"Theliterature was always saying in that biological production would cease in apost-catastrophic environment," Jones noted. "We felt that because ofwhat mixotrophy algae could do, that wasn't always the case."

Jones joinedforces with Charles Cockell, a microbiologist at the Open University based inthe UK who specializes in catastrophicenvironments, as well as other researchers. They tested both freshwater andocean mixotrophs under conditions ranging from low light to complete darknessfor six months, and added food sources during short-term experiments tosimulate decaying organic matter.

However,Jones and her colleagues also wanted to see how mixotrophs fared when living togetherwith phototrophs, or light-dependent organisms. They tested mixotrophs andphototrophs separately and together under the different light conditions.

Turns outthat the mixotrophs survived all the experiments, and some even grew under the lowlight conditions. Their ability to consume other organisms or organic matterhelped them rebound quickly after low light returned, perhaps similar to theclouds of dust and debris finally beginning to clear.

But thereal shock came from how well light-dependent organisms did when living withthe mixotrophs. No photosynthesis could take place under the complete darkness,but the phototrophs mostly managed to survive based on nutrients cycled by the activemixotrophs.

"Wewere extremely surprised at how well phototrophs did during six monthsdarkness, when they can't eat at all," Jones said. Such findings may causeresearchers to rethink how well certain life forms survived the catastrophicimpacts that dot Earth's geological record.

Furthermore,the mixotroph activity allowed the phototroph populations to rebound quicklyback to normal within a month. And in the end, both mixotrophs and phototrophstended to fare better when living together.

"Solong as mixotrophs are cycling nutrients, [phototroph] algae can take offquickly and get the life cycle going," Jones explained.

Only one low light condition saw phototrophs fail to survivewhile living with mixotrophs. The phototrophs may have used too much energytrying to do photosynthesis in the weak light, or perhaps the hungry mixotrophssimply fed on their fellow organisms.

"Youcan only do so much in a flask, and obviously the mix of species would be muchgreater in a natural environment," Jones pointed out.

Still, theoverall results suggest how mixotrophs provide a cushion against catastrophefor certain ecosystems, and may even prevent huge population crashes. Theresearch is further detailed in the July/August issue of the journal Astrobiology.

Jones andher colleagues plan to conduct more studies with greater mixes of species, inan environment that would more closely resemble the natural world. They alsowant to shorten experiments to three months rather than six.

That looksall well and good for the smaller organisms. But humans, who would have a muchharder time feeding themselves if the skies went dark, may want to plan on how toprevent such catastrophic asteroid impacts in the future.