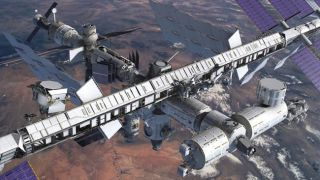 Antimatter galaxies and dark matter have long hauntedphysicists' theories, but no instrument in orbit has had the power to confirmor deny their existence. Now a $1.5 billion cosmic ray detector scheduled forlaunch in 2010 could usher in a new era for discovering all that's weird andwonderful about the universe.

Cosmic rays consist of high-energy particles that emergefrom catastrophic events such assupernovas, and may also hold the clues to whether antimatter galaxies and darkmatter truly exist. Detecting cosmic rays firsthand from the ground hasproved difficult, because they collide with atoms in Earth's atmosphere andbreak up into a shower of secondary particles.

"Earth's atmosphere absorbs everything, so you cannotstudy primary cosmic rays until you go to space," said Samuel Ting, an MITphysicist who first proposed a large cosmic ray detector back in 1994.

Now just months from completion, the Alpha MagneticSpectrometer (AMS) represents years of work by NASA and the Department ofEnergy to overcome the challenges of putting a superconducting magnet intospace. It also holds the hopes of an international physics community that wantsto finally tackle some of the longest-standing questions behind the universe.

The mission to launch the spectrometer was initially canceled by NASA in the wake of the 2003 Columbia tragedy. But NASA reinstated it after Congress approved funding for an extra shuttle flight to the International Space Station. That flight is slated to launch in either July or September 2010.

A large superconducting magnet allows AMS to analyze thecharged particles of cosmic rays, given that the particle paths curve in thepresence of magnetic fields. The charged particles then pass through a numberof detectors that allow scientists to figure out whether the particles areprotons or electrons, or even anti-electrons known as positrons that mightsignal the existence of dark matter.

Crunching the data from the sensors requires an onboardsupercomputer that combines 650 computer units and uses 2.5 kilowatts of power? far more power than a satellite's solar panels can normally provide. Thatmeans AMS must find a home on the International Space Station, where the Canadianrobot arm will help install the instrument on an outside truss.

But putting a magnet in space has long frustrated scientistsbecause of the magnetic compass effect, Ting told SPACE.com. Just as themagnet in a compass rotates to point north due to Earth's magnetic field, thelarge AMS magnet would want to rotate along with the entire space station.

"The task of building a space-qualified superconductingmagnet is a very, very hard one," said Ben Monreal, a physicist at the Universityof California in Santa Barbara. He worked on one of the AMS sensors as a gradstudent at MIT, but also observed how engineers at NASA and SpaceCryomagnetics, Ltd. worked around the magnet problem.

Engineers ultimately used a set of racetrack coils that canceledout the dipole magnetic field outside AMS, and will prevent the instrument fromgiving space station residents a case of the dizzies.

An Italian satellite calledPAMELA launched in 2006 with the capability of detecting some antimatterparticles such as positrons. But AMS has about 250 times the sensitivity ofsuch existing instruments for detecting high-energy particles.

The AMS magnetic setup also resembles that of the LargeHadron Collider, or the most powerful particle accelerator in the world locatedat CERN in Switzerland. The underground particle accelerator sends protonszooming around a 17-mile-long circular track and smashes them together tocreate combined energies of 7 tera-electronvolts (TeV).

Still, that fades in comparison to cosmic ray particles thatmay have energies of 100 million TeV or more.

"The space station [AMS device] can detect particles ofpractically unlimited energy," Ting noted. Those include positrons that maysuggest collisions between particles of dark matter thought to make up 90percent of the universe.

The 15,000 pound cosmic ray detector remains just monthsaway from delivery to NASA's Kennedy Space Center in Florida, where it can prepfor a 2010 launch to the space station aboard one of the last space shuttleflights. But physicists can still recall the long battle to move AMS forward tothis point.

One of the bleaker moments came after NASA lost the spaceshuttle Columbia in a 2003 tragedy. The space agency told physicists thatno room existed for AMS aboard remaining shuttle flights, at least until morerecent schedule reshufflings that added shuttle flights.

"It's been up and down," Monreal recalled. "Ican think of three or four cycles where it looked [like] it was completelydead, and then things looked up."

Ting and other physicists have already begun working aroundthe clock to ensure that everything checks out with the cosmic ray detector.They also plan to monitor AMS 24 hours a day, seven days a week after launch using a control room and working in shifts. The plan, they hope, will help to hit scientific pay dirt when the instrument begins analyzing theheavens.

"Certainly for me, it's the most difficult experimentI've ever done," Ting said. "That's why we want to take the time toget it right."