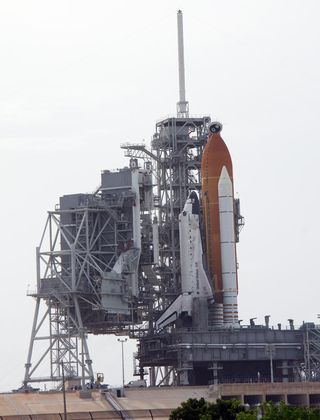 On Launch Pad 39A, workers move the Rotating Service Structure around space shuttle Discovery in order to replace the Tyvek covers protecting the shuttle's nose thrusters in preparations for an Aug. 28, 2009 launch attempt.
(Image: © NASA/Ken Thornsley)

Discoveryis now poisedto blast off at 11:59 p.m. EDT (0359 Aug. 29 GMT) toward the InternationalSpace Station after mission managers settled on a plan to test a suspect fuelvalve aboard the shuttle if it acts up during today?s countdown, NASA officialssaid.

NASA launchrules require the hydrogen fuel valve on Discovery to be closed for launch.Engineers suspect a position sensor that detects when the valve is open orclosed may be faulty, not the valve itself, and have come up with new ways totest it during tonight?s launch attempt, said Mike Moses, head of Discovery?smission management team.

?We are notgoing to truly know that the valve is closed,? Moses said Thursday. ?We aregoing to have a high confidence that it is closed.?

NASA hasuntil Aug. 30 to launch Discovery before standing down due to a scheduleconflict with another operation on the Air Force?s Eastern Range used forrocket and shuttle launches.

IfDiscovery does not launch by then, NASA would have to stand down until Oct. 17to avoid more traffic conflicts at the space station in September, when Japanplans to launch an unmanned cargo ship on its maiden flight to the outpost andRussia is due to launch a new crew and space tourist late in the month.

Discovery?sSTS-128 mission will mark NASA?s fourth shuttle flight this year and the secondthe launch at night in 2009.