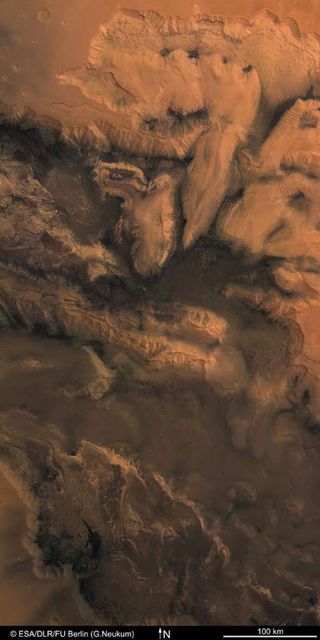 Mars' great canyon complex, Valles Marineris, dwarfs thesize and splendor of Earth's own Grand Canyon. But while geologists have aformed a fairly complete picture of how the Grand Canyon formed, the mechanismsthat carved out Valles Marineris and its component canyons have been a longstandingmystery, with explanations ranging from massivefloods to tectonic processes like those that cause earthquakes and buildmountains on Earth.

"How did these gigantic canyons really form? Were theyall formed by floods, or were other things going on?" asks John Adams ofthe University of Washington in Seattle and lead author of a new study thatseeks to answer the questions. "These have been controversial questionsgoing back to the very first Mariner pictures of Mars. And they're stillcontroversial questions, which means we don't really fully understand what'sgoing on yet."

The answer for how at least parts of the canyon complexformed may lie in Hebes Chasma, a 190-mile-long (310-kilometer) scar cut intothe Martian surface and connected to the main body of Valles Marineris.

Adams and his colleagues, Alan Gillespie and DavidMontgomery, think that Hebes, and other chasms, might have formed after saltsin the surface layers were heated up, causing water to melt out below thesurface. This water then rushed out through underground plumbing, causing thelayers of dirt and rock above to collapse, creating the canyon scar in thesurface.

Montgomery and Gillespie began with the observation ofsulfate salts in the area of the canyons. (These compounds have been found innumerous spots around the Martian surface by orbitingspacecraft and robotic rovers.)

These salts are hydrated, which means that molecules ofwater are attached to the sulfate molecules. Montgomery and Gillespie thoughtabout what would happen if those hydrated salts were heated up. The physics andchemistry involved in the process indicated that the water would separate outfrom the salts, taking with it some dissolved materials. This muddy, brinywater would pool up underground, causing an increase in volume under thesurface.

The heating of these salts on Mars isn't a stretch, "becauseit gets hotter as you go down with depth of course," Adams explained. "Butmore importantly, the huge canyon complex of Mars is right next to the hugevolcanic complex, the Tharsis plateau." ?The heat involved with volcanicprocesses could have warmed up the salts in the Martian regolith.

Once the muddy water was separated, it would have to escapesomehow from its subterranean well because there wasn't enough room under thedirt and rocks to hold all that newly formed water. The two possibilities forthe water's escape were: bursting out over the surface; or funneling out belowit, like a plug pulled from a bathtub drain.

The scientists needed a place to test out the drain part ofthe theory, which is where Hebes Chasma came in.

No way in or out

Hebes Chasma was of interest because it is "the verybest example of a fairly large canyon in the Valles Marineris complex that hasabsolutely ?no inlet or outlet on the surface," Adams toldSPACE.com. "There's no way that water could have gone out and over theedge there." So Hebes Chasma could not have formed by erosion from giant floods,like the carving of the Grand Canyon but on a larger scale.

Montgomery and Gillespie and other researchers looked to seeif the landforms found in Hebes Chasma were what would be expected of asituation in which the muddy brine drained out of it underground pool through aseries of subsurface channels, like pipes. Adams and his colleagues madedetailed geologic maps of the region to see if the features were consistent.

They also enlisted the help of geologists at the University of Texas at Austin, who built a desktop-sized scale model of Hebes Chasma andfilled it with silicon gel and sand mixtures, then drained it to see what wouldhappen.

"The results of that were absolutely astounding tous," Adams said ? they matched the formations found in Hebes Chasma to aT.

The match of the two approaches led Adams and his colleaguesto conclude that Montgomery and Gillespie's process likely explained theformation of Hebes Chasma.

There are, of course, still plenty of unanswered questions.

For one thing, the scientists don't know exactly when Hebesformed or how long the process took.

Another mystery is where all that muddy brine went to.

"This is still the big mystery," Adams said.

It's possible that the briny mixture traveledunderground and came up and out elsewhere ? a possible source of theoutflow floods thought to have formed other parts of the canyon.

Adams and his colleagues plan to look closely at more chasmsthat also show evidence of material sliding down into depressions in thesurface to see if they can also be explained by this mechanism.

How much of Valles Marineris might have formed from thedrainage of muddy brines isn't known, and it's likely that the whole systemformed from a "mixed bag" of mechanisms, including floods, drainageand tectonic forces, Adams said.

The new study was detailed in the August issue of thejournal Geology.