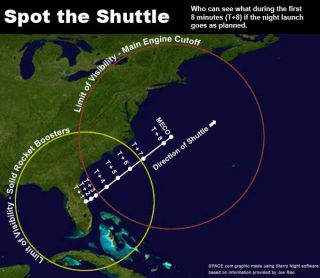 Viewing Map: Weather permitting, a night launch of the space shuttle is typically visible from much of the East Coast. The most dramatic view is from inside the yellow circle. But within the red circle, skywatchers may see very bright, pulsating, fast-moving object that resembles the brightest stars in the sky from 3 to 8 minutes after launch. For viewers near the edges of the circles, however, the shuttle will hug the horizon, so an unobstructed view is needed.
(Image: © SPACE.com/Starry Night Software)

People in the eastern United States will get a great opportunity, weather permitting, to see the space shuttle Discovery launched into orbit early Tuesday morning. And it might also be the final opportunity ever to see a nighttime shuttle launch.

This flight (STS-128) will be the 30th to rendezvous and dock with the International Space Station (ISS), and the glow of the shuttle's engines will be visible along much of the Eastern Seaboard. A SPACE.com map shows the area of visibility.

To reach the space station, Discovery must be launched when Earth's rotation carries the launch pad into the plane of the station's orbit. For mission STS-128, that will happen at 1:36:05 a.m. ET on Tuesday, resulting (if all goes as planned) in NASA's second nighttime launch of a space shuttle in 2009 (the most recent was March 15).

As has been the case with other launches to the ISS, Tuesday's liftoff will bring the shuttle's path nearly parallel to the U.S. East Coast.

After STS-128, there could only be just six more flights left before the shuttle program finally comes to a close (tentatively set for September 2010). Of those six remaining flights, five are to be launched during the midday or morning hours.  One mission, STS-130, involving shuttle Endeavour is currently scheduled to be launched just before sunrise on Feb. 4.  That launch would come during morning twilight, but unless it's delayed, or if the current launch schedule significantly changes, this week's predawn launch of Discovery could be the very last time a shuttle is launched in total darkness.

In the Southeast United States, depending on a viewer's distance from Cape Canaveral,Fla., the "stack" (shuttle orbiter, external tank and solid rocket boosters) can be easily followed thanks to the fiery output of the solid rocket boosters. The brilliant light emitted by the two solid rocket boosters will be visible for the first 2 minutes and 4 seconds of the launch out to a radius of some 520 statute miles from the Kennedy Space Center.

Depending on where you are located relative to Cape Canaveral, Discovery will become visible anywhere from a few seconds to just over 2 minutes after it leaves Pad 39-A.
For an example of what all this looks like from Florida, see video of a night launch made by Rob Haas from Titusville, FL, on Dec. 9, 2006 (the STS-116 mission).

After the solid rocket boosters are jettisoned, Discovery will be visible for most locations by virtue of the light emanating from its three main engines.  It should appear as a very bright, pulsating, fast-moving star, shining with a yellowish-orange glow. Based on previous night missions, the brightness should be at least equal to magnitude -2; rivaling Sirius, the brightest star in brilliance.  Observers who train binoculars on the shuttle should be able to see its tiny V-shaped contrail.

James E. Byrd shot video of the shuttle from Virginia after a November 2000 night launch. The bright star Sirius briefly streaks through the scene giving a sense of scale and brightness to the shuttle's glow.

For most viewers, the shuttle will appear to literally skim the horizon, so be sure there are no buildings or trees to obstruct your view.

Depending upon your distance from the coastline, the shuttle will be relatively low on the horizon (5 to 15 degrees; your fist on an outstretched arm covers about 10 degrees of sky). If you're positioned near the edge of a viewing circle, the shuttle will barely come above the horizon and could be obscured by low clouds or haze.

If the weather is clear the shuttle should be easy to see. It will appear to move very fast; much faster than an orbiting satellite due to its near orbital velocity at low altitudes (30-60 mi). It basically travels across 90 degrees of azimuth in less than a minute.

Discovery will seem to "flicker," then abruptly wink-out 8 minutes and 24 seconds after launch as the main engines shut-down and the huge, orange, external tank (ET) is jettisoned over the Atlantic at a point about 795 statute miles uprange (to the northeast) of Cape Canaveral and some 430 statute miles southeast of New York City. At that moment, Discovery will have risen to an altitude of 341,200 feet (64.6 statute miles), while moving at 17,552 mph (mach 24.6) and should be visible for a radius of about 770 statute miles from the point of Main Engine Cut Off (MECO).

Following MECO and ET separation, faint bursts of light caused by reaction control system (RCS) burns might be glimpsed along the now-invisible shuttle trajectory; they are fired to build up the separation distance of the orbiter from the ET and to correct Discovery's flight attitude and direction.

Lastly: before hoping to see the shuttle streak across your local sky, make sure it has left the launch pad!

Assuming a good load for Discovery's fuel cell system, Discovery should be able to make four launch attempts in five days. Should the launch be scrubbed, the liftoff time will occur an average of 24 minutes earlier per day. If, for example, the launch is scrubbed on Aug. 25, liftoff on Aug. 26 is scheduled for 1:10:21 a.m. ET; on Aug. 27 it's 12:49:49 a.m. ET. Should weather or technical issues delay the launch until Sept. 1, liftoff would then be scheduled for 10:23:07 p.m. ET.

Getting views during the mission

During this 13-day mission, both the shuttle and the International Space Station will be visible during the predawn hours across North America and Europe.  Those across the northern US and Canada will have visibility through all 12-days, but those across the southern states will only have views during the last several days of the mission.

During the mornings of Aug. 25 and 26 and Sept. 5 and 6, it may be possible to see Discovery and the ISS as two separate entities, appearing as bright moving "stars,"  At all other times during the mission, you'll see only one singular bright moving star, as that will be when the two space vehicles are docked together.

So what is the viewing schedule for your particular hometown? You can easily find out by visiting one of these four popular web sites: Chris Peat's Heavens Above, Science@NASA's J-Pass,  NASA's SkyWatch, and Spaceweather.com.  Each will ask for your zip code or city, and respond with a list of suggested spotting times. Predictions computed a few days ahead of time are usually accurate within a few minutes. However, they can change due to the slow decay of the space station's orbit and periodic reboosts to higher altitudes. Check frequently for updates.