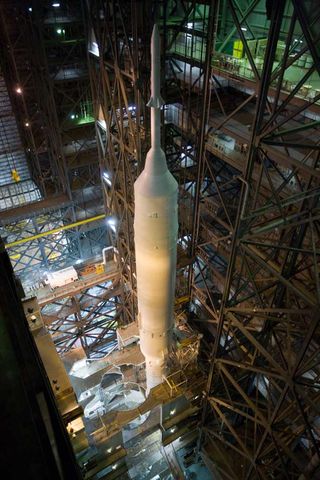 NASA has finished building the first of its new Ares I rockets slated to replace the aging space shuttle fleet and return astronauts to the moon - a gleaming white booster due to blast off this fall.

The Ares I-X rocket is the inaugural booster in NASA?s first new rocket line for crew transport in more than 25 years. It is scheduled to launch Oct. 31 on a demonstration flight to prove the viability of the Ares I rocket to haul NASA?s new astronaut-carrying Orion spacecraft into orbit.

The fully assembled test rocket is now the tallest vehicle in the cavernous Vehicle Assembly Building at NASA's Kennedy Space Center in Florida since the Saturn 1B rockets that sent astronauts to the Skylab space station in the 1970s. It stands a towering 327 feet (100 meters) high, about 14 stories taller than launch-ready space shuttles.

"More than three years of hard work with the NASA and contractor team has brought us to this historic moment," said Bob Ess, NASA?s Ares I-X mission manager, in a statement. "This flight test is a critical step in continuing our design process for the Ares vehicle and the first flight for the Constellation program."

The Constellation program is NASA?s plan to retire its aging three-shuttle flight by 2010 or 2011 and replace it with a new system of Ares I rockets and Orion spacecraft by 2015. The new human spaceflight system forms the core of NASA?s plan to return astronauts to the moon by 2020.

A White House-appointed review committee has found that NASA?s current exploration budget falls nearly $30 billion short of being able to pay for the lofty lunar goal. The committee will file a final report on its review of NASA?s human spaceflight plans by Aug. 31, and has drawn four potential future options to be considered by President Barack Obama.

Only one of those options includes the Ares I rocket, which is a two-stage rocket made up of a solid-fueled first stage and a larger, liquid-fueled upper stage.

NASA officials told SPACE.com that the options put forth by the committee will not immediately affect plans for the Ares I-X test flight. Only with direct instruction from the Obama Administration can the agency shift its current exploration plan and test regime, they said.

The Ares I-X rocket is not a full version of the Ares I booster. It carries a dummy upper stage and Orion mass simulator. It also includes a fake fifth segment of its five-piece first stage, which is derived from the four-segment solid rocket boosters used to launch space shuttles.

After launch, the first stage is expected to fall away and parachute down to the Atlantic Ocean to be recovered, while the dummy second stage and attached Orion and abort tower simulators crash into the ocean further downrange. The Ares I-X should reach an altitude of about 25 miles (40.2 km) in roughly two minutes after liftoff, mission managers have said.

Engineers have attached 700 sensors to the test rocket and will perform a series of systems checks over the next few weeks to be sure the Ares I-X is ready to fly. They will also perform a so-called ?modal test? to gently shake the tall, slender rocket in a stiffness test, NASA officials said.

NASA?s goals for the Ares I-X flight are to prove the stability of the Ares I rocket stack, which has a fatter second stage perched atop a skinny first stage, as well as test ground processing and launch pad operations.

Excessive vibrations have also been a concern with the Ares I rocket that prompted engineers to come up with a shock absorbing system to dampen the worst of the shaking. So NASA hopes the upcoming test will yield new insight into booster?s stability and performance during first-stage separation.

According to NASA?s current plan, the Ares I-X rocket would roll out to the seaside Pad 39B launch site ? a modified shuttle launching pad ? four days before its planned liftoff, NASA spokesperson Allard Beutel.

The Ares I-X flight is the first in a series of test launches for Ares I and Orion vehicles. The first test firing of a full five-segment Ares I first stage motor is scheduled for Aug. 27.

Three abort system tests are planned between now and 2012, as well as a follow-up Ares I-Y test and the first integrated test of Ares I and an Orion vehicle (called Orion I) in 2015. But the demonstration launch has been plagued by months of delays due to technical challenges.

Beutel said that, barring any unforeseen glitches, Ares I-X engineers are currently on track for the Halloween launch test.

?If the loads testing goes well, then we should be able to make the Oct. 31 target,? Beutel said.