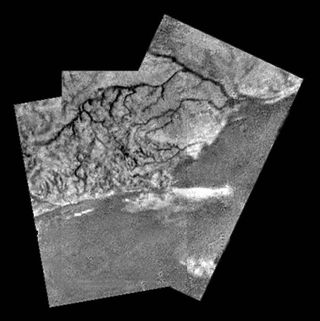 This mosaic of three frames taken by Huygens provides unprecedented detail of a high ridge area on Titan's surface, including the flow down into a major river channel from different sources.
(Image: © ESA/NASA/JPL/University of Arizona.)

PARIS-- Scientists piecing together data from Europe's Huygens probe to Saturn's moon Titan described the hazy satellite today as an environment in which a frequent rain of liquid methane falls through a thick smog onto hills made of water ice.

Methane concentrations are replenished probably from an underground source, they said during a press briefing held here.

A week's analysis of the 350 photos and other data received from the Huygens descent probe confirmed many of the suppositions made about Titan and whetted scientists' appetite for a follow-on mission.

"We can now dream seriously of sending rovers to Titan," said  Huygens project manager Jean-Pierre Lebreton of the European Space Agency (ESA). "All we need is the money."

It took NASA's Cassini satellite seven years to reach Saturn orbit, and then release Huygens. With no Huygens revisits currently scheduled, it will be at least a decade before Huygens' data is complemented by another descent probe or lander.

Meanwhile, the Cassini orbiter will be using Huygens data to help in measuring Titan from orbit. "Huygens has provided ground truth for Cassini," Lebreton said.

As captivated as they were by what Huygens discovered in a 3.5-hour descent and landing on Titan on Jan. 14, Huygens scientists cautioned against generalizing about what Huygens' surface looks like.

"We sent three spacecraft to Mars and they all went to the most boring places" before other satellites discovered the most interesting features of Mars, said Toby Owen of the Institute for Astronomy in Honolulu. Owen is a principle investigator for studying Huygens' atmospheric sensors. Huygens images, he said, "come from one single place in a very different world."

Martin G. Tomasko of the University of Arizona at Tucson, principal investigator for Huygens' camera system, said the 350 images taken by Huygens and relayed by Cassini to Earth suggest it had rained liquid methane recently before Huygens 'arrival. The rain washes off the water-icemountain peaks of the hydrocarbon particles that settle on them, he added.

Tomasko described the scenes showing lighter colors on the mountain tops and darker colors in the drainage areas as "an Earth-like process, if you like, but with very exotic materials."

Surface temperatures on Titan were measured at -179 degrees Celsius (94 degrees Kelvin or -290 degrees Fahrenheit), which is about what scientists had expected. Little sunlit penetrates the dense hydrocarbon atmosphere, a fact that was only partly offset by Huygens' 20-watt lamp, which enabled the probe to deliver relatively clear pictures even on the surface. Tomasko described the process as "taking pictures of an asphalt parking lot at dusk."