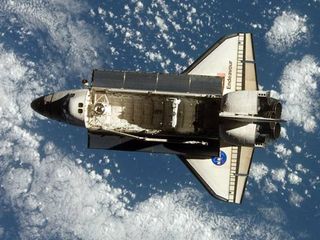 Space shuttle Endeavour as it was seen departing from the International Space Station on Tuesday, July 28.
(Image: © NASA)

The sevenastronauts aboard the shuttle Endeavour are hoping for clear skies over Floridatoday as they prepare to land after a marathon flight to the InternationalSpace Station.

Endeavouris slatedto land at NASA?s Kennedy Space Center in Cape Canaveral, Fla., at 10:48a.m. EDT (1448 GMT) with favorable weather expected. There is a slight chancethat rain or thunderstorms may stray too close to the shuttle runway, but the astronautsand Mission Control are optimistic the good weather will hold.

?I?m readyto get back,? Endeavour commander Mark Polansky said in a televised interviewThursday. ?Personally I really miss my family, so I?m looking forward to seeingthem.?

Polanskyand his crew are returning to Earth to complete a grueling 16-day mission tothe International Space Station, where they replaced a member of the outpost?ssix-man crew and delivered a brand newexperiment porch for the station?s $1 billion Japanese Kibo lab. They alsoperformed five challenging spacewalks - tying the record for most ever at thestation during a shuttle flight - to install the porch, replace aging solararray batteries and deliver vital spare parts.

The missionalso temporarily boosted the station?spopulation up to 13 people - its highest ever - for the first time. Thestation increased its crew size from three to six people in late May, with theseven astronauts on Endeavour more than doubling that when the shuttle arrived.

It?s notthe last time so many people will gather in space - NASA?s next shuttle missionslated for late August will do the same. Endeavour astronauts said that, ingeneral, the station was a comfortable place, even with 13 people in closequarters.

?It isimmense for a space vehicle,? said Canadian astronaut Julie Payette Thursday. ?Therewas room for everybody, we could spread out.?

One of thestation?s twospace toilets and a carbon dioxide removal device broke down during themission. Both were swiftly repaired, though the carbon dioxide scrubber shutdown again Wednesday. Station astronauts are expected to complete a new repair thisafternoon.

Wakata isheaded home after living aboard the station for 4 1/2 months as Japan?s first long-termspace resident. He arrived at the station in March on a different shuttle andwas replaced during Endeavour?s flight by NASA astronaut Tim Kopra. Wakata saidhe longs to taste sushi again and take a refreshing dip in Japan?s hot springs.

Endeavouractually has two chances to land today, both of them in Florida. Inaddition to the 10:48 a.m. EDT (1448 GMT) opportunity, the shuttle could alsotry for a 12:22 p.m. EDT (1622 GMT) return if weather thwarts the firstattempt.

The weatherforecast from NASA?s Spaceflight Meteorology Group at the Johnson Space Centerin Houston predicts a slight chance of rain and thunderstorms within 30 miles (48km) of Endeavour?s Florida runway. The chance of rain is expected to increaselater for the second opportunity.

But theobserved weather at the landing site in recent days has been favorable at thetime Endeavour is expected to touch down, NASA flight director Bryan Lunneytold reporters Thursday.

?It's Florida. It's summer. So there's always, in my mind,kind of a chance of rain there,? Lunney said. ?Right now?things are lookingreally good for us.?

If Endeavourcannot land today, NASA would activate a backup runway at Edwards Air ForceBase in California land Saturday for sure. The weather in California isfavorable for both Friday and Saturday. Endeavour has enough supplies to lastuntil Sunday, but NASA typically keeps one day in reserve in case of anunexpected glitch.

NASAprefers to land Endeavour in Florida, which is the launch site and home port ofits three-shuttle fleet. A landing in California can add up to a week of time and$1.8 million in transport costs to ferry shuttles back to the spaceport fromCalifornia atop a modified 747 jumbo jet.

Endeavour?sSTS-127 mission to the space station is NASA?s third of up to five shuttleflights planned for this year.