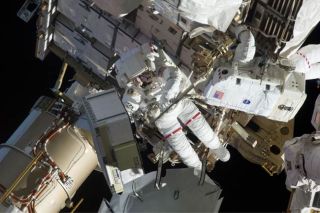 Astronauts Tom Marshburn (left) and Christopher Cassidy share duties on the fourth spacewalk on July 24, 2009 during Endeavour's STS-127 mission and its crew's joint activities with the space station.
(Image: © NASA)

Two astronautswill venture outside the International Space Station Monday to tackle somefinal tasks in the fifth and last spacewalk of their mission to the orbitinglaboratory.

AstronautsChris Cassidy and Tom Marshburn are slated to don bulky NASA-issue spacesuits andbegin the planned 6 1/2-hour service call at about 8:28 a.m. EDT (1228 GMT), but could start earlier if they run ahead of schedule. They plan to tackle some last remaining maintenancechores during the excursion.

The two astronautswill use a different type of air-scrubbing canister in their spacesuits thanthe ones used on their last two spacewalks. During those spacewalks, Cassidy?squick, strenuous pace outmatched his air scrubber?s ability to keep his carbon dioxidelevels down.

WhileCassidy, a veteran Navy SEAL who was deployed to Afghanistan in 2001 just afterthe 9/11 terrorist attacks, was never in any danger during those spacewalks, hehas received some good-natured ribbing from the 12 other astronauts with himaboard the linked station and shuttle Endeavour.

?Yes, I am takingquite a bit of teasing about this,? Cassidy said during a televised briefingwith reporters Sunday. ?I have a whole lot of confidence in the suit.?

During today?sspacewalk, Cassidy and Marshburn plan to rewire power cables for the station?s American-builtattitude control system, fix loose insulation on Dextre - a Canadian maintenance robot - and installa pair of television cameras on the outpost?s Japanese Kibo laboratory. Theyalso hope to set up a spare parts storage mechanism need for a future shuttle flight.

Cassidy andMarshburn will both make their third career spacewalk during the orbital work,which will wrap up a five-spacewalk marathon by the space shuttle Endeavour?screw to upgrade the station, deliver spare parts and install a Japanese experimentporch at the end of the $1billion Kibo laboratory.

Endeavourcommander Mark Polansky said that he has total confidence in his spacewalking crewand the support from Mission Control, though his crew will be as vigilant asever during today?s spacewalk.

"I think we're all keenly aware that [spacewalks] carrysome risk to them and so we're going to be very, very deliberate and carefulabout the last [spacewalk],? Polansky said Sunday. ?Because in my book, thelast one you do is always the one you have to watch out for the most.?

Polanskyand his crew are in the homestretch of a 16-daymission to the International Space Station. Endeavour is slated to leavethe space station Tuesday and land in Florida on Friday.