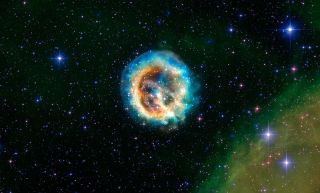 To celebrate the 10th anniversary of the launch of NASA's Chandra X-ray Observatory, scientists today released a striking new image of an exploded star.

The remnants of the supernova, catalogued as 1E 0102.2-7219, are about 190,000 light-years away in the Small Magellanic Cloud, one of the nearest galaxies to the Milky Way.

The colorful scene was created when a star that was much more massive than the sun exploded, an event that would have been visible from the Southern Hemisphere of the Earth more than a thousand years ago, according to a statement from the Chandra X-ray Center.

Chandra first observed E0102, as the supernova remnant is commonly known, shortly after its launch in 1999. New X-ray data have now been used to create the new image, in which the lowest-energy X-rays are colored orange, the intermediate range of X-rays is cyan, and the highest-energy X-rays are blue.

Optical observations from the Hubble Space Telescope (in red, green and blue) are overlaid on the X-ray data, to complete the picture by showing additional structure in the remnant and also reveal foreground stars in the field.

The Chandra image shows the outer blast wave produced by the supernova (blue), and an inner ring of cooler (red-orange) material. This inner ring is probably expanding ejecta from the explosion that is being heated by a shock wave traveling backwards into the ejecta.

A massive star (not visible in this image) is illuminating the green cloud of gas and dust to the lower right of the image. This star may have similar properties to the one that exploded to form E0102.
Analysis of the Chandra spectrum gives astronomers new information about the geometry of the remnant, with implications for the nature of the explosion.

The sound of an ambulance siren is Doppler shifted too, changing pitch as it moves away from you, which stretches the sound waves out, compared to when it was moving toward you and compressing the sound waves.

A clear separation was detected between the red-shifted and blue-shifted light, leading astronomers to think that the appearance of E0102 is best explained by a model in which the ejecta is shaped like a cylinder that is being viewed almost exactly end-on.

This model suggests that the explosion that created the E0102 remnant may itself have been strongly asymmetric, consistent with the rapid kicks given to neutron stars after supernova explosions, Chandra astronomers explained.

Another possibility is that the star exploded into a disk of material formed when material was shed from the equator of the pre-supernova red giant star. Such asymmetries have been observed in winds from lower mass red giants that form planetary nebulas.

Chandra as returned a wealth of observations over the past decade, helping astronomers better understand exploding stars, black holes, and the workings of the early universe.

"Chandra's discoveries are truly astonishing and have made dramatic changes to our understanding of the universe and its constituents," said Martin Weisskopf, Chandra project scientist at NASA's Marshall Space Flight Center in Huntsville, Ala.