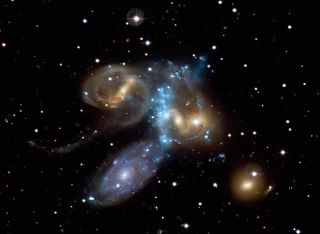 This beautiful image gives a new look at Stephan's Quintet. The curved, light blue ridge running down the center of the image shows X-ray data from the Chandra X-ray Observatory. Four of the galaxies in the group are visible in the optical image (yellow, red, white and blue) from the Canada-France-Hawaii Telescope. A labeled version (roll over the image above) identifies these galaxies (NGC 7317, NGC 7318a, NGC 7318b and NGC 7319) as well as a prominent foreground galaxy (NGC 7320) that is not a member of the group.
(Image: © X-ray (NASA/CXC/CfA/E.O'Sullivan); Optical (Canada-France-Hawaii-Telescope/Coelum))

A fresh glimpse of a well-known set of colliding galaxies gives scientists a rare opportunity to observe the way the galactic bodies evolve.

A newly released image of Stephan's Quintet, a compact group of galaxies located about 280 million light-years from Earth, shows a system dominated previously by spiral galaxies developing into one made up of elliptical galaxies.

One of the galaxies (NGC 7318b) is hurling through the core at almost 2 million mph (3.2 million kph), generating a shockwave that may be causing the ridge of X-ray emission seen by NASA's Chandra X-ray Observatory.

Astronomers suspect that some of the X-ray emission may have been caused by Supernova explosions, stellar winds and binary systems with massive, disintegrating stars.

Scientists say other signs complex interactions, such as the long tails visible in the image, were likely the result of one or more passages through the galaxy group by NGC 7317.