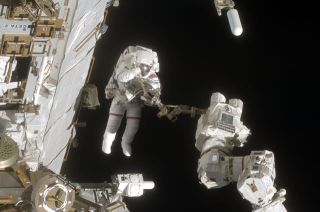 Endeavour astronaut Dave Wolf works at the end of the International Space Station's robotic arm in a spacewalk on July 20, 2009, the 40th anniversary of the Apollo 11 moon landing, during the STS-127 mission.
(Image: © NASA.)

Twoastronauts will head outside the International Space Station Wednesday tobegin the delicate task of replacing old batteries at the very edge of theorbital outpost.

SpacewalkersDave Wolf and Chris Cassidy will replace four of six old solar array batterieson the station?s on the port side during the trickymaintenance call, which is slated to begin at about 10:58 a.m. EDT (1458GMT) and last more than six hours. It is the third of five spacewalks forastronauts while the shuttle Endeavour is linked to the station.

?We?vealways wrestled with how to do this battery change out,? Wolf told SPACE.combefore flight. ?We?ve been wringing our hands for upwards of seven years onthis task.?

While itseems straightforward, the batteries are the oldest ones onthe space station, which uses solar arrays to generate power. They areattached to the station?s Port-6 (P6) solar wing - the first ever launched tothe outpost - and have been in space since 2000.

Simplyreaching the work site is challenging since it sits at the end of the port sideon the station?s backbone-like main truss. The space station?s metallicbackbone is as long as an American football field and serves asthe foundation for its four sets of solar arrays. Wolf and Cassidy will beworking hundreds of feet away from the station?s core, with no quick way back.

?I thinkit?s the farthest you could get from the airlock hatch?since the airlock?s onthe starboard side,? Cassidy said in a NASA interview.

All six ofthe new batteries to be installed are attached to cargo pallet that iscurrently perched at the tip of the station?s 57-foot (17-meter) Canadarm2robotic arm. Astronauts moved the arm into position on Tuesday and will stretchit out to its full length today, with the battery carrier extended towardtoday?s portside worksite.

Moving the individualbatteries has its own challenges. Wolf and Cassidy will have to shuffle the oldand new batteries between their work site and the carrier on the robotic arm.Each battery weighs 367 pounds (166 kg) and is the size of a refrigerator.

?It?s along, complicated choreography to change all these batteries,? Wolf toldreporters before flight. ?They?re heavy, delicate, so there?s a lot of chancefor error?it just all has to go right.?

In additionto their battery swap work, Wolf and Cassidy also plan to prepare a trio of newexperiments for installation on the station?sJapanese porch. They are also expected to finish adding insulation to powerlines that allow visiting shuttle like Endeavour to tap into the station?spower grid.

The lasttwo of the six old batteries being replaced at the station will be swapped outduring a Friday spacewalk - the fourth for Endeavour?s seven-astronaut crew,mission managers said.

Theastronauts are currently in the middle of a 16-day mission to deliver thestation?s new experiment porch and a new crewmember. They are slated to returnhome July 31.