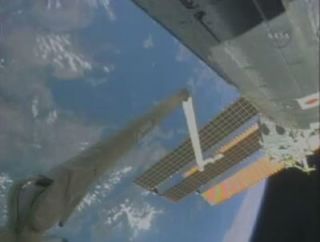 The shuttle Endeavour's robotic arm is outstretched so its cameras can watch the space statino's robotic arm install a Japanese experiment carrier on the Kibo lab's porch on July 21, 2009 as the blue waters of coastal Greece pass 220 miles (354 km) below the spacecraft (top left).
(Image: © NASA TV.)

Astronauts used two space cranes to attach a Japanese experiment carrier to the International Space Station's new porch Tuesday so its vital cargo can be delivered later this week.

The 13 spaceflyers at the linked shuttle Endeavour and space station plucked the carrier out of the shuttle's cargo bay with the orbiter's robotic arm and handed it off to the station's own arm in order to install it on the station.

The platform is only a temporary addition for the station and will sit at the tip of the new porch at the end of the outpost's $1 billion Japanese-built Kibo lab. Later this week, astronauts will move experiments from the carrier to the Kibo porch using the lab's Japanese robotic arm, and then return the carrier back to Endeavour's cargo bay for the return tip home.

Japan's Aerospace Exploration Agency (JAXA), which built Kibo, shipped its first experiments to the station on a separate carrier because of porch's size. Some of the experiments are designed to be attached to the side of the porch, which would have made it too wide to fit in Endeavour's cargo bay if they installed before launch.

"It wouldn't fit in the cargo bay," said space station flight director Holly Ridings late Monday. The three experiments — which include a space communications device, an X-ray observatory and a study of the space environment's effect on electronics — would likely not have survived the vibrations of launch if they weren't secured in their own separate carrier, she added.

"The carrier was activated and that was all nominal, so that was great news," space station flight director Brian Smith told reporters Tuesday afternoon.

The astronauts also retrieved a different carrier that was used to deliver space station spare parts earlier in the mission from an attachment point on the outpost's railcar. That storage platform will be returned to Earth aboard Endeavour next week.

Time off and NASA's new chief

After putting in a partial work day, Endeavour's seven-astronaut crew will get some much-deserved time off to rest, one that includes answering questions submitted via Twitter and YouTube from space, Ridings said.

Endeavour commander Mark Polansky used the Twitter microblogging Web site to chronicle his crew's training and hoped to use the service and YouTube to spark interest in NASA among the public.

"The crew has a half-day off tomorrow," Ridings said. "We've been working them extremely hard."

Endeavour's seven-astronaut crew is in the midst of a 16-day mission to deliver the Japanese porch and experiments, as well as a new crewmember for the outpost's six-man team. It is one of NASA's longer construction flights to the space station, and includes a packed schedule of robotics and five spacewalks to complete the Kibo lab and deliver spare parts that only a shuttle can carry.

More rest breaks are planned for later in the marathon construction mission.

While the shuttle and station astronauts work and rest in space, NASA's new chief Charles Bolden and deputy chief Lori Garver provided an agency-wide update for employees at 12 p.m. EDT (1600 GMT). The update was broadcast live on NASA TV from the agency's headquarters in Washington, D.C.

Bolden and Garver spent about an hour discussing their personal backgrounds, views on spaceflight and recent confirmation, but did not take questions from NASA employees. They discussed NASA's 40th anniversary of the Apollo 11 moon landing, which occurred Monday, and Endeavour's mission to the station, which has gathered the most people ever — 13 — at the same place in space.

Astronauts aboard the station and their flight controllers in Mission Control would likely miss the update since they had to stay focused on the shuttle mission, Ridings said.

"We'll just have to catch the replay," she added.

On Monday, NASA engineers also gave Endeavour's heat shield a clean bill of health with regard to launch debris. A final inspection, which astronauts will conduct after leaving the space station next week, will check for any new damage caused by micrometeorites or space junk.

"The mission is going great and we're staying right on track," Smith said.