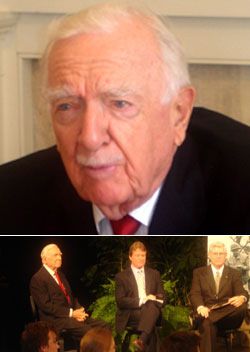 Veteran journalist Walter Cronkite is honored at a ceremony, below, in Austin, Texas in 2006.
(Image: © NASA.)

Veterantelevision news anchorman Walter Cronkite, who chronicled the rise of Americanspaceflight and NASA?s historic Apollo 11 moon landing in 1969, died on Fridayat age 92, according to wire reports.

Cronkite, aformerCBS anchor once named ?the most trusted man in America,? died at his homein New York while surrounded by family after a long illness, according to theAssociated Press.

Cronkitewas already a veteran journalist before anchoring the ?CBS Evening News? fromNASA?s initial Mercurylaunches in the early 1960s through the space shuttle era.

"It iswith great sadness that the NASA family learned of Walter Cronkite's passing,?said newly confirmed NASA chief Charles Bolden, a former astronaut and shuttlecommander, in a statement. ?He led the transition from print and radioreporting to the juggernaut that became television journalism. His insight andintegrity were unparalleled, and his compassion helped America make it throughsome of the most tragic and trying times of the 20th century.?

Forty yearsago, during NASA?sApollo 11 mission that landed the first men on the moon on July 20, 1969,Cronkite provided marathon live coverage of the moon shot. He shouted ?Go, babyGo!? as the Saturn V rocket launched the Apollo11 astronauts toward the moon, and spent 27 of 30 hours at the time of landing chronicling the flight for CBS, NASA has said.

"Fromthe earliest days of the space program, Walter brought the excitement, thedrama and the achievements of space flight directly into our homes,? Boldensaid. ?But it was the conquest of the moon in the late 1960s that energizedWalter most about exploration.?

Bolden saidthat it was Cronkite?s coverage of the Apollo 11 mission that helped inspirehim to pursue a career in spaceflight. Bolden flew in space four times aboardNASA shuttles and commanded two missions.

Cronkiteanchored the "CBS Evening News" from 1962 to 1981, according to theAssociated Press. During that time, he chronicled the assassination ofPresident John F. Kennedy, the Space Race between the United States and SovietUnion, and later the Vietnam War.

In a 1996interview with writer Kira Albin, Cronkite said "the whole period of the'60s changed a lot of us; there was never a decade like that in Americanhistory ... to have the decade capture one of the great accomplishments of thiscentury: man landing on the moon.?

NASAhonored Cronkite for his lifetime of work in 2006, naming him an Ambassador ofExploration - an honor typically reserved for astronauts and employees - andpresenting him with a moon rock sample that he later presented to theUniversity of Texas. He was the only non-NASA recipient of the award.

"Ithink that 500 years from now the young people that are living on spacestations and space cities and perhaps on the orbs themselves out there ... theywill be recognizing the most important feat of all time,? Cronkite said when heaccepted the award. ?500 years from now they will be celebrating the firstlanding on the moon and the first walk on the moon."

Cronkitesaid, then, that the Apollo 11 moon landing lefthim speechless despite all of his preparation. He considered it an honor tohave covered the pioneering days of space exploration and said he envied thejournalists who would follow to report on the next phase of spaceflight.

"It'shard for us to really understand the immensity so far of the conquest ofspace," Cronkite said.