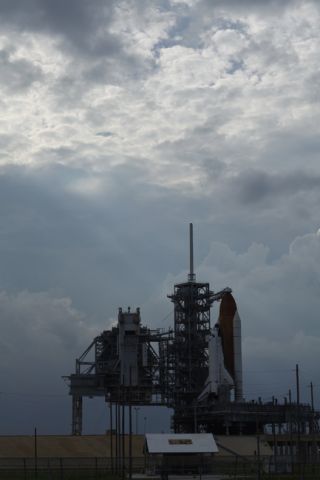 CAPE CANAVERAL, Fla. - NASA is hoping the sixth time is the charm for the space shuttle Endeavour, which is poised to make yet another launch attempt late Wednesday after repeated delays.

So far, stormy weather and a gas leak have conspired to prevent Endeavour from lifting off here at Kennedy Space Center. But the shuttle is once more  primed and ready on Launch Pad 39A as astronauts and mission managers hope for a 6:03 p.m. EDT (2203 GMT) blast off.

Today's weather forecast is slightly better than in recent days, with a 60 percent chance of good conditions expected. Lightning and thunderstorms have foiled three earlier scheduled launches for Endeavour's 16-day STS-127 mission. A gas leak prevented two attempts in mid-June and has since been repaired.

The shuttle and its seven-member crew are slated for a marathon trip to the International Space Station (ISS) to attach a new outdoor experiment porch to the Japanese Kibo laboratory and drop off vital spare supplies. This final segment will complete the mammoth $1 billion Kibo, which means "Hope" in Japanese.

The shuttle's visit is eagerly anticipated by the six people waiting on the space station: The station's crew consists of Russian cosmonauts Gennady Padalka and Roman Romanenko, and astronauts Michael Barratt of NASA, Frank De Winne of Belgium, Robert Thirsk of Canada, and Wakata. When Endeavour arrives at the ISS, the population there will jump to 13 - a record high.

"We have a crew exchange which is always very exciting, of course, for the crew because we've got some new dynamics, you have some new people you can talk to on the crew," De Winne said in a preflight interview. "And also living and working then with 13 people on board of the space station will be interesting because it will be the first time that there will be 13 people onboard."

Endeavour's last attempt to blast off on Monday was abandoned minutes before launch because lightning and thunderstorms moved in near the launch pad and the Shuttle Landing Facility here, required to be clear in case it's needed for an emergency landing shortly after launch. Mission managers decided not to try a launch on Tuesday to avoid predicted bad weather and to allow ground crews to replace a small thruster cover on the shuttle's nose that came unglued.

Launching this evening will allow Endeavour to keep its mission largely intact, though some events will be rescheduled to allow for an earlier undocking time from the space station to make way for an incoming Russian cargo ship.

If today doesn't work out, NASA can try again Thursday, though that would require giving up some activities during the mission, including at least one spacewalk.