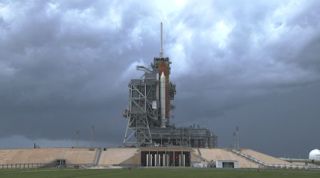 CAPE CANAVERAL, Fla. — After a month of delays, the beleaguered space shuttle Endeavour is aiming to lift off tonight toward the International Space Station, but only if the weather cooperates.

Endeavour will make its third launch attempt this evening at 7:39 p.m. EDT (2339 GMT) from the seaside launch pad here at NASA's Kennedy Space Center. The shuttle's two earlier efforts to blast off in mid-June were thwarted by a hydrogen gas leak that has since been repaired.

The weather poses tonight's biggest concern, NASA said, with only a 40 percent chance of favorable conditions for launch. If thunderstorms and thick clouds hinder today's plans, NASA can try again tomorrow or Monday, when the weather outlook is slightly better.

"We do have some challenges with the weather, but we'll just work through those," said NASA's Mike Moses, head of Endeavour's Mission Management Team, during a Friday briefing.

The astronauts plan an ambitious schedule with five spacewalks and complex robotic work to install the final segment of the Japanese Kibo laboratory and spare supplies on the station.

"We don't want to lose sight of the complexity of this mission," Moses said. "It's going to be unbelievably challenging."

The Kibo element — a large outdoor platform for exposing science experiments to the space environment — will complete the $1 billion Japanese facility.

"Kibo is the first manned space system for the Japanese people, who are paying a lot of attention to this flight," said Koki Oikawa, a member of the Kibo project team at the Japanese Aerospace Exploration Agency (JAXA). "We can look at the complete of the whole Kibo soon, so that's very exciting."

Six spaceflyers await Endeavour on the space station, including Japanese astronaut Koichi Wakata, who is set to be replaced by NASA astronaut Tim Kopra as an Expedition 20 flight engineer. The station's current crew includes two Russian cosmonauts and one astronaut each from the United States, Japan, Canada and Belgium.

When the shuttle arrives, the International Space Station will be home to 13 people — its highest population ever. The mission is also the first in which two Canadians — Payette and astronaut Robert Thirsk — will be in space at the same time. It also marks the flight of the 500th person, slated to be Cassidy, to orbit.

Originally scheduled to launch June 13, Endeavour was kept on the ground twice before by a leak of gaseous hydrogen from a vent pipe on its external fuel tank. Since then, NASA has conducted a thorough investigation of the issue, and tracked the problem back to a misaligned plate on the shuttle's 15-story external tank.

After successfully testing a fix last week, mission managers said they're confident it won't pose a problem this time.