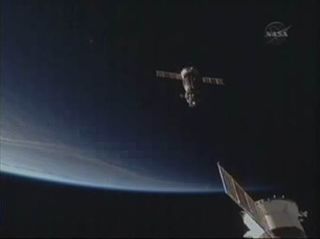 Threecrewmembers of the International Space Station took a short trip aboard theirSoyuz lifeboat late Thursday as traffic heats up at the orbital outpost.

Russiancosmonaut Gennady Padalka, the station?s commander, and two crewmates movedtheir Soyuz TMA-14 spacecraft to a new parking spot outside orbiting laboratoryto clear a berth for a new cargo ship due to arrive in late July. It was ashort trip, lasting just 26 minutes and included half of the station?ssix-man crew, but is part of a carefully orchestrated series of arrivalsand departures at the outpost this month.

?It?s justa set up for the traffic patterns in orbit,? NASA spokesperson Kelly Humphriestold SPACE.com before the brief flight.

The Soyuz tripfollowed the Tuesday undocking of the unmanned Russian cargo ship Progress 33,which left the space station and is loitering nearby. The automated spacefreighter will return to the space station on July 12, when it will fly within about50 feet (15 meters) of a roof-mounted hatch on the station to test new docking equipmentinstalled last month. After the test, the disposablecargo ship will be sent plunging through Earth?s atmosphere to be intentionallyburned up over the Pacific Ocean.

Also due atthe space station this month is NASA?s shuttle Endeavour, which is set tolaunch late July 11 from the Kennedy Space Center in Cape Canaveral, Fla. Theshuttle is expected to dock at the station on July 13 - one day after the Progress33 ship?s rendezvous test - carrying the last piece of the outpost?s massive JapaneseKibo lab. It will be installed during a marathon 16-day mission, which wasdelayed by a hydrogengas leak that has since been resolved.

Endeavourwill launch with seven astronauts aboard and temporarily boost the station?screw size to 13 people, its highest number ever and the historical maximum populationin space at any given time. Past instances of 13 people in orbit occurred aboardmultiple spacecraft.

Anotherunmanned Russian cargo ship, Progress 34, is also slated to launch this monthand dock at the space station on July 27, though its arrival may be delayed upto two days depending on when Endeavour flies, NASA officials said. It isbecause of the impending arrival of Progress 34 that Padalka and his crewmates movedtheir Soyuz spacecraft today, they added.

Padalkaflew the Soyuz spacecraft from the space station?s rear docking port at the aftof its Zvezda service module to a new Earth-facing berth on Pirs, aRussian-built module on the outpost?s bottom. Also aboard the Soyuz wereastronauts Michael Barratt of NASA and Koichi Wakata from Japan.

The shortspace hop began at 5:29 p.m. EDT (2129 GMT) as the space station flew 223 miles(358 km) above the southern Pacific Ocean. Three other members of the station?sExpedition 20 crew, representing Belgium, Russia and Canada, remained insidethe outpost during the move. Their spacecraft, Soyuz TMA-15, arrived in lateMay, boosting the station to its full six-person crew for the first time sinceconstruction began on the outpost in 1998.

Padalka,Barratt and Wakata were expected to open the hatches between their Soyuz and stationat about 8:45 p.m. EDT (0045 July 3 GMT) to rejoin their three crewmates insidethe station, NASA officials said.