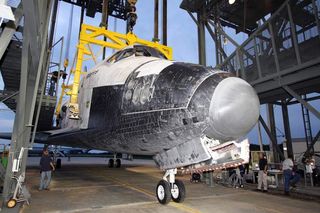 Workers prepare to remove the hoist from Atlantis that was used to separate it from the Shuttle Carrier Aircraft, or SCA, which returned it to Kennedy from California on June 3, 2009 after a ferry flight that ended its STS-125 mission to the Hubble Space Telescope.
(Image: © NASA/Jack Pfaller.)

A knobwedged against a cockpit window in shuttle Atlantis was freed, NASA saidTuesday, giving engineers a chance to look more closely at any damage itcaused.

It's not yet clear if thewindow's nicked pressure pane, the innermost of three panes, might needto be replaced.

That could require adifficult and time-consuming procedure that historically was only done whenorbiters were grounded for periods of extended maintenance in California.

"We're used toswapping the outside panes after every flight," said Kyle Herring, a NASAspokesman. "The inner pane is typically not changed."

He said it was too soon tosay whether the unusual problem could impact a targetedNov. 12 liftoff for Atlantis on a mission to deliver spare parts to theInternational Space Station.

The notched steel rotaryknob, used to fasten a work light to a bracket, wedged itself between theshuttle's dashboard and one of six forward windows during the final mission to repairthe Hubble Space Telescope in May.

NASA was worried that someremoval techniques, potentially including taking apart the dashboard, couldcause more serious damage to the window.

But it was freed Mondaynight after technicians pressurized Atlantis' crew cabin, causing it to expandslightly and ease the knob's grip.

The knob was first chilledwith liquid nitrogen and showed some movement. It came loose minutes after thecabin pressure was raised to more than 17 pounds per square inch.

The standard cabin pressureduring flight is 14.7 psi, or roughly sea level. The pressure was lowered to10.2 psi during five back-to-back spacewalks to install new instruments onHubble and repair damaged ones.

The window problem sparkedspeculation that NASA could decide to mothball Atlantis early rather that putit through an extended repair process, a possibility agency officials havedownplayed.

"It's probably way toopremature to say what the ramifications are now that the knob has beenremoved," Herring said.